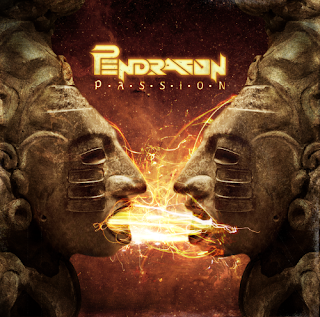 Say what you want about Pendragon, but they just won’t quit. Back with their 9th studio release, Passion, the UK’s own Pendragon have proven that it is possible to grow old while remaining relevant after over three decades of activity in a tumultuous musical climate. They achieve this by being highly omnivorous, culturally speaking, assimilating into their sound aspects of multiple genres ranging from Progressive Rock and Heavy Metal, to the club/trance scene and even Hip Hop.  It’s rare that a progressive album like this would have so much to offer such a variety of listeners, but I guess that’s why they call it progressive, right? It’s got short head bangers for the rockers and lengthy sweeping epics for the head-fans, so no thoughtful listener should feel left out.


Listening to the premier (and titular) track on the album’s first rotation, my biggest fear was that this band was going to sound too much like Radiohead. Now it’s understandable that a band from the UK is inevitably going to pick up some pointers here and there from their home country’s (arguably) biggest and brightest star of the last 25 years, but my first impression was that it may have been too much. The first ninety seconds of “Passion” sounds suspiciously like “Weird Fishes/Arpeggi,” the fourth track from Radiohead’s 2007 release In Rainbows, complete with break beats, arpeggiated guitars, sneaky bass into and emotive, borderline falsetto vocals. Thom York much, anyone? Luckily for Pendragon, it is after those first ninety seconds where the apparent similarities cease and the album really begins to come into its own. A quasi-metal breakdown ensues, and “Passion” becomes one of those head bangers I told you about earlier. What Barett himself calls, “[T]he unleash hell section.”


Most of the tracks have what I have come to call a “point of no return” somewhere in them, meaning that more often than not the songs will transition from the A-theme to the B-theme, never to return again to the A-theme. This oft-used device keeps the longer numbers from seeming dull or abstruse. Scott Higham has insinuated himself into the lineup nicely, joining the band on drums in 2008, and has done a stellar job of locking it down tight with bassist Peter Gee (himself a member since 1986) while Clive Nolan’s keyboards tie the whole package up neatly, and give the tracks their character. The years have not been unkind to Nick Barrett’s voice, which is still powerful and suggestive after performing for longer than nearly half of the earth’s population has been alive*. (*Statistics approximate, extrapolated from the populations of US and China, applied globally.)


I’ve already mentioned Radiohead, but other palpable influences include Pink Floyd (particularly on the longer numbers “Empathy” and “This Green and Pleasant Land”), Motorhead (during some of their harder moments) and even a little Oasis (if you’re into that sort of thing, no judgments here). Overall, Passion is a formidable release, impressive considering the bands longevity. There’s also nothing about this release to suggest that they plan on stopping anytime soon. Given their track record for releasing albums, I’d say fans could expect to hear from Pendragon again in about 3-5 years. In the meantime: Enjoy!