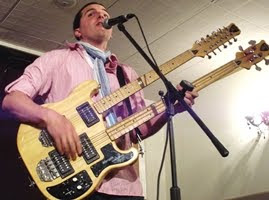 Amsterdam, Netherlands-June 15, 2011- Franck Carducci started to play music at the tender young age of 5. He grew up in a family where music was a way of life. This influenced him in such a way that he would become the multi-instrumentalist (bass, piano, guitar, drums, etc.) that he is today.

Like many musicians of his genre he discovered The Beatles and eventually evolved into listening intently to bands like Pink Floyd. Later on this would lead him to opening a gig for one of his idols Steve Hackett in 2010. Hackett would congratulate Carducci for his performance then have a conversation with him a few days later to encourage him to self-produce his own album.

Franck would take the advice from the elder statesman of progressive rock and begin to record what would eventually become his new release Oddity. The talented musician worked his way through the recording session, mixing styles and interweaving sounds of Mellotrons, 12 string guitars, Hammond organ, and many others. The imagery provided by this myriad of sound brings to you imaginary tales of unlikely characters inspired by English literature and Greek mythology. Although the stories may be ancient history the music provided is modern progressive rock with a polished studio sound that brings all of those characters and places to life all at once.

"Franck Carducci's latest album "ODDITY" is imaginative, varied and strong and I enjoyed listening to it."
Steve Hackett (Genesis)

"Wow, what else can I say but - I think the album is absolutely brilliant! It's beautifully put together, the playing is fantastic, the vocals are excellent, and it had me glued to my chair from start to finish. I love the variety of styles and moods, and there is always a surprise around each corner. I also love that every track is different, with its own personality. It's a delight to hear something that strives to bring a lot of variety, yet has its own unique sound, and succeeds!"
Nick Magnus

Oddity is a gem of an album full of magic and wonder and the varying guitar parts and Franck’s excellent vocals allow the listener to take a journey they will want to go on repeatedly. The music allows you a front row seat to a fantasy world where you can sit back, close your eyes, press play, and then find yourself there in seconds.

Oddity is available at the Franck Carducci website, iTunes, Amazon, Bandcamp or CD Baby. Visit the website for more information, media and news.