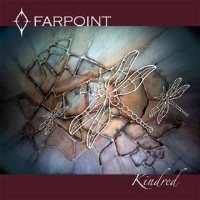 Kindred is a solid album with some spacy, heady jams and catchy vocal melodies. Even on the first listen, more than one song may have you singing along before the end. The overall tone of the album is joyous and the message is largely one of positivity. The titles are ambiguously spiritual, if not out-right religious sounding (“Water of Life” and “Live For Him,” to name a couple), but Farpoint does not bill themselves as Christian or canonical and in no way do they come off as preachy. It could be I’m reading too much into something that isn’t there, or it could be that life below the Bible belt has had such a profound effect on their development that their faith has become inseparable and indistinguishable from their craft. (*Note: the video below confirms my suspicion that these themes are in fact Christian in nature. The vocals are more pronounced on the acoustic version of “Calling Out,” because there’s less in the song to command your attention, so the subject really presents itself clearly, leaving little room for interpretation. Especially after that set up…)
Many influences are present on this album, as the band seems to cherry-pick their favorite aspects of Americana, and using these bits to sculpt a unique sound. Farpoint offers a little southern rock here (“Another Day”), some subtle island flavor there (“Unity”),  and they even set their sights beyond Americana and adding a dash of Tull throughout (although it might be unfair of me to compare EVERY band with a flautist to Jethro Tull in some way). Frank Tyson’s bass lines are both rhythmic and melodic all at once, and the lilting melodies of Jennifer Meeks’ flute keep the mood light and airy. Not really the kind of music you dance to, more like let yourself sway in the wind to.
“Another Day” betrays the bands southern heritage and showcases their affinity for some nice major-scale noodling a la Allman Brothers, with a vocal melody reminiscent of that “Breakfast At Tiffany’s” song, only not as saccharine and infectious (or obnoxious and abrasive, depending on your perspective); the likes of which haven’t been seen or felt since the mid 90’s. “Calling Out,” the album opener, begins with a nice, short, lo-fi drum sample which bursts into complimentary bass and guitar riffs with a percussive, funky sound, before breaking down into a tense and hair raising section which builds in intensity, before releasing itself with a precise, melodic guitar solo. I was slightly under impressed with “By My Side,” featuring Meeks on lead vocals. Her voice sounds like her instrument, the flute, and that’s not ok with me. Not everyone will experience this I’m sure, but I found it to be the only track that’s difficult to listen to. Meeks is an accomplished flautist, but I think her voice is best suited to harmonizing, not carrying the melody. That is what her flute is for.
Throughout the album little snippets of themes and ideas are heard that the listener might swear they’ve heard somewhere else, which could either make you grin or cringe, depending on what you’re looking for. Rather than shamelessly biting off other styles, I think these little snips and snaps elsewhere heard are more like playful nods of grateful acknowledgement to their musical mentors. There isn’t an abundance of original ideas to be found on Kindred, more like tried and true ideas arranged in a new and interesting way. Regardless, their talent as musicians is apparent and it may be that their recent signing with 10T records will encourage them to take their music in new and exciting directions in the future.
3.5/5 stars
Key Tracks- Calling Out, Another Day
Drew Vreeland
May 31, 2011
By Keith "MuzikMan" Hannaleck at June 02, 2011