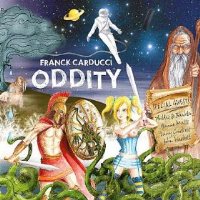 A glance at the cover of Franck Carducci’s Oddity gives an accurate depiction of the adventure that is to come.  From ancient battlefields to the depths of dreams, it is going to be a journey. The opening track “Achilles” sets the tone for the rest of the album and it does a wonderful job of doing so.  From the moment the song starts, there is a sense of going on a grand journey.  The music grabs your attention and does not let go. The song title alludes to the Greek hero and the epic traditions of classical literature.  “Achilles” carries this sense of epicness at a running time of just less than fifteen minutes long.  There is a seamless transition into the next songs, “The Quind” and “The Eyes of Age.”  “The Quind” carries with it a pleasant somber atmosphere and on “The Eyes of Age” Carducci’s vocals harmonize nicely with collaborator Yanne Matis.
The middle of the album is the highpoint with “Alice’s Eerie Dream.”  The song sounds a bit heavier than the rest of the previous songs, which I consider to be a positive aspect of the song.  The guitar in the beginning really pulls the listener in making the ears want more. Although it is a great song and captures the surreal qualities of a dream, the “eerie” part could have been more prominent.  Dreamlike and fantastic? Yes. Eerie and unsettling? No.  It is still my personal favorite despite the very minor flaw.
“The Last Oddity” is another wonderful track.  It is a slower song and very mellow.  It reflects the cover artwork and the journey taken throughout the album by moving away from the earthly splendor characterized in “Achilles” and looks toward the sky. It contrasts well with “Achilles” and provides a balance to the themes of the album.  Also, there are two bonus tracks on Oddity entitled “The Carpet Crawlers” and a radio edit of “Alice’s Eerie Dream.”   The edited version of “Alice’s Eerie Dream” makes it more manageable for the radio, but it is hard to do a twelve minute song justice when two thirds are cut out.  The edit is basically the beginning of the complete version, so be sure to check out the other eight minutes.
Franck Carducci’s Oddity is a gem of an album full of magic and wonder.  Sit back, close your eyes, press play, and let the music take you to another world.
3.5/5 Stars
Key Tracks- Achilles, Alice’s Eerie Dream, The Last Oddity
Brian McKinnon
June 5, 2010
By Keith "MuzikMan" Hannaleck at June 05, 2011