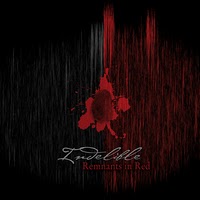 If you’re looking for a dramatic, dark album with an eclectic finish, you should check out Indelible’s sophomore release, Remnants in Red. The band from Norway, consistiting of Marius Sjøli, Robert Hunter, Jason Walton and Mona Sjøli, was formed in 2008 when Marius wanted to create an experimental group. The word indelible means “not able to be forgotten or removed,” and the music of this band certainly has the capability to stick in your mind.
Album opener, “The Vision,” is a soft, yet eerie keyboard piece that has sounds of water falling, intriguing the listener to explore the rest of the band’s concoction.  “Mundane Monotony” has some great electric guitar work with some saxophone thrown in. Mona Sjøli sings a line over and over and it becomes mesmerizing.
I found Marius’s voice to be more likeable than Mona’s, more in tune and melodic. Sometimes her singing fit, and other times it was a little painful to tolerate in line with the music.  An example of this is on the title track, “Remnants in Red.” While it’s obvious that she has a powerful voice, it almost seems like she purposely sings out of tune. I’m not sure if this goes along with being “experimental.” If it does, then it works perfectly!
The down tempos and styles of playing the various instruments, from sounds of xylophones to chimes, to water dripping, things ripping, and winds blowing succeed in giving the songs a sinister feel. The closing song, “The Void,” is similar to the opening track in that it is purely instrumental and has the ominous sound that leads us out of Indelible’s peculiar world.
All in all, Remnants in Red is an enjoyable album. The discordance doesn’t necessarily take anything away from the atmosphere Indelible creates for the listener. I could have done with fewer vocals. The music can certainly stand on its own, and as the saying goes, sometimes words get in the way.
4/5 Stars
Key Tracks – The Vision, Mundane Monotony, The Glowing Sun
Christen LaFond – Assistant Editor/Staff Development
June 11, 2011
By Keith "MuzikMan" Hannaleck at June 13, 2011