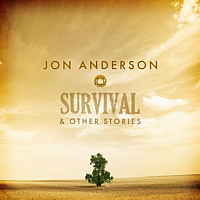 Survival & Other Stories is the latest solo release from the legendary Jon Anderson, one of the most influential and recognizable voices in modern music. Even though it is technically a solo release (at least it’s billed that way), it is also in a way a vast collaborative effort; the byproduct of numerous musicians from all over the world submitting material in response to an open call on his website four years ago. Binding the pieces together with his signature vocals, Anderson has spent the last several years creating from many disparate pieces one cohesive unit: an album that is both unique in style and readily accessible to fans both new and old.
Though Jon Anderson is known primarily as a vocalist, the point of this album is not to call attention to the prowess of his pipes, but rather to showcase his skills as a songwriter. A skill he retains in spades. Considered within the context of Andersons prolific body of work, the instrumentation is often unique and at times quite sparse, particularly on tracks like “Understanding Truth” or “Effortlessly” where Anderson’s soft tenor is accompanied only by an acoustic guitar, or (appropriately) “Just One Man,” where his back up is a solo piano. There are no barn burners, no stadium rockers to be found here. As its title suggests, Survival & Other Stories speaks to the experience of the individual, and may turn out that it’s best enjoyed that way as well.
“New New World” begins with pleasant and uplifting strings, and its leadoff position on the album creates the sensation of a false start, since the two tracks that follow are slower, softer, simpler songs, allowing the listener to slip into Survival & Other Stories as if it were a warm, inviting bath. Soothing sounds to bathe in (or bathe to…). It does not create tension. The album closes with “Cloudz,” an ethereal piano/synth duet that has Anderson harmonizing with himself in a waterfall or round type way that sounds like a choice passed up for selection for the soundtrack of Twin Peaks. In between these two  tracks there is little (if any) dissonance, sonic, cognitive or otherwise, allowing the listener to walk away from the listening experience feeling almost refreshed, similar to the way I imagine one might feel after having finished meditating for an equal amount of time, if one has done it properly.
“Big Buddha Song” is the song to hear if unfortunate circumstances dictate you hear only one track from Survival & Other Stories (provided those same circumstances also dictate that you may choose…). Not only does it have the most compelling, percussive chord progression, the looping lead riff is simply hypnotic. You’ll catch yourself nodding your head in time with the music, and realize you may not be able to recall when exactly you started this motion. It draws you in before you know it, and when you become aware of the hold it has taken, the song (appropriately) ends. It is hands down the most engaging song on the album. It also offers a glimpse of Anderson’s development spiritually, a journey which has closely paralleled his development as an artist. Taking with him along his path various aspects and beliefs from many different, often contrary cultures, he has assimilated these conflicting and complimentary ideas into a truly personal spiritual experience (much like he has done with this album), which has led to a wholly unique worldview and in my opinion has allowed him to reach greater depths of his own creative wellspring within in a way most artists can only hope to achieve. The type of singular consciousness it might take several lifetimes to develop. But who knows, maybe this isn’t his first time around.
It will be interesting to hear how the themes and modes established on Survival & Other Stories will develop on the two albums that are rumored to succeed this release in the coming years. It is unclear whether it will continue in the same direction with the same momentum or undergo a change. Certainly the past has taught us that Jon Anderson is not a songwriter who will allow himself to be pigeonholed, and his work will continue to defy convention. A man who has spent nearly half a century entertaining millions should not be underestimated.
4/5 Stars
Key Tracks- New New World, Big Buddha Song, Sharpening The Sword
Drew Vreeland
June 27, 2011
By Keith "MuzikMan" Hannaleck at June 28, 2011