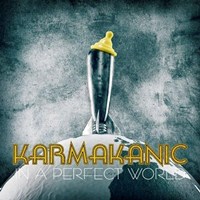 Karmakanic is the amazing progressive rock band hailing from Sweden’s frigid shores. With three prior albums under their belt, the band is about the release their fourth and best one yet. A Perfect World is their 2011 release and is a study in pop, fusion rock, and has a feeling of the 70’s riding rampant throughout.
The band consists of Jonas Reingold (fretted and fretless bass and backing vocals), Marcus Liliequist (drums), Göran Edman (vocals), Lalle Larsson (keyboards and backing vocals), Nils Erickson (vocals and keyboards) and Krister Jonsson (guitars).
“1969” is the first track of this amazing album. Light multi-instrumental playing sets a reminiscent tone and the vocals bring back memories about dancing in mud and listening to songs about love and how “we shall overcome.” Then it ramps up immediately to an intense guitar sound. “How the world is changing” is the theme of this song. Frantic guitars, keyboarding and lyrics spin a feeling of anticipation and trepidation as the song builds and carries you into audible bliss.
“Turn It Up” is one of my favorite songs on the album. It is passion skipping over waves of sound. Flying through the air and spinning, dipping and gliding with each epic lyric and beat. This song is very much about the current economic times. Buying, selling, in the black and in the red.  “Where money talks compassion walks.” That is the heart of this song. “Winners, traders. We fix it in our favor.” That says so much about the world economy with a crisis around every corner and shortages one day and a glut the next. “They’ve given me the right to pull the strings and make you think its fine.” Only Karmakanic can sing about something that makes so many people angry and turn it into an amazing rhythm fest. This is truly an incredible song, both with the lyrics and sound.

“The World is Caving In” is track three. Delicate music and thought-provoking lyrics taunt you into believing this is a mellow song. Not so. This song has the power to rip out your soul and hand it to you in a bowl. With a couple of scoops of ice cream to boot. Ramping up with guitar and keyboards blazing, the male vocalist sings about playing the game with too many people deciding how he should spend his time. He lost his sense of what was right and what was wrong. “Will I ever reach the river to wash away my sins? Will I ever see a new beginning when my little world is caving in?” In the midst of these amazing lyrics, guitar riffs continue to light a trail of fire right to the bottom of your soul. Choices drew the vocalist from a sheltered life and down a path of destruction, pointing toward the place below. “All we got in life is time. Too many people spending mine.” He lost his youth and is trying to find a path to a new road. This song really resonates and captures your attention with the passion of voice and the skillful playing of the band. It is a rock opera of the soul. This song will haunt you.
“Can’t Take It with You” is a wild ride through the bowels of Hell. Dante would be proud. More guitars and vibrant keyboarding make the intense lyrics light up. Complete with demons audibly chomping at the bit to take a bite out of the money hungry, this song has a Cuban flair to it. Like an episode from Dexter. You can almost see him dancing around with these serial killer toys, just waiting to get his hands, or scalpel into an avaricious person who climbed over someone else to get where they wanted to be. “Money, money. Sweeter than honey.” Swirling music spirals you down into the fires below as the lyrics and beat fan the flames of the underworld higher. Demons growl with glee, anticipating new playmates as more people chase the almighty dollar instead of caring for their fellow man. An excellent song and my favorite on this album.
“There’s Nothing Wrong With the World” is a commentary on how the world has gone completely off kilter. Mild keyboarding and a light buzz of a newscaster in the background deceptively make you think this will be more of a quiet song. Not a chance. Guitars wail and erupt into a passionate diatribe of the weather being crazy and “white doves leaving vapor trails in the shape of a pentagram.” Religion exchanging blood for oil in holy wars and your health failing as you tick like a time bomb. Guitars float and circle around the lyrics of this song that is a sign of our times.
“Bite the Grit” is a funky song with twisting lyrics and fierce guitar playing. “You can’t take the easy way until the battle is won.” Being numb to the world won’t make it easier. Blaming others and running from responsibility doesn’t make the world a better place. Combine deep lyrics with exceptional guitar and keyboarding and this song takes no prisoners. It is a shot right in the eye.
“When Fear Came to Town” is blues and old school guitar playing. It is time to get humanity back up to “higher ground” and “stave off the end of innocence.” Where has compassion gone? The sense of wonder we used to have is evaporated to the winds because “fear has come to town.” This song is very thought-provoking and says a lot about our society as a whole. The last part of the track is bittersweet with elegant keyboarding and mournful guitar playing tearing at your heart.  It is a plea to look at our souls and find the light that has always been there and use it to find a way to a new beginning.
Karmakanic has done an amazing job on this album. In a Perfect World is a soul searing, blazing trail of guitar, keyboard, and multi-instrumental mastery. The lyrics serve a dual purpose as introspection on our own lives and as an outward scope on the world and how insane it can seem sometimes. Every note and lyric is perfection.  It holds reminiscences of the past and glimpses of our future. There was not one song I didn’t like. This album will be at the top of my favorites list for a very long time.
Stars 5/5
Key Tracks-Can’t Take It with You, Turn It Up, The World is Caving In
Dana Wright
June 9, 2011
By Keith "MuzikMan" Hannaleck at June 11, 2011