Review: Mars Hollow-World in Front of Me 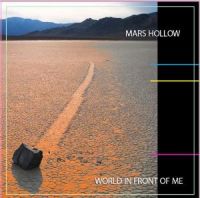 I was immediately prepared to like this album before I even had track one cued up for play. The title of Mars Hollow’s latest release, World in Front of Me, had the singular ability to take me back in time nearly a decade to when “The World In Front of You” (one of the better songs by one of the better bands of the ever embarrassing punk revival period of the late 90’s early 2000’s: Face to Face) was getting heavy rotation on the Discman plugged into the tape deck in my ’98 Plymouth Breeze. I know, right? Better days. But having done a little research and reading up on Mars Hollow while preparing for this review, I was relieved not to have to relive another pop-punk bubblegum chew-a-thon. Mars Hollow’s sound is a little more mature, a little more cerebral, and a lot more enjoyable, at least at this stage in my development as a critical listener. (No disrespect to F2F intended as they can still turn out a hit or two. Check out this year’s release Laugh Now, Laugh Later if you don’t believe me.)
But we’re not here to talk about punk-rock, we’re here to talk about prog-rock (punk’s older, nerdier brother), so let’s get to it. World in Front of Me sounds as if it was ripped right from the seventies and transplanted into the present. They’ve locked down the sound of an era, and it takes more than just ripping off the best parts from the greats of ages past to accomplish this. There’s something about the overall tone of this album that makes it sound somewhat anachronistic, like it was recorded long ago, locked away, and only now has it been let out. As if that was how it managed to avoid the hard edges and high gloss that most commercially produced music seems to have chiseled and polished into it since around the time CDs came out. Almost as if you were listening to it on vinyl, it seems softer and smoother to the ear. Whether this was a conscious choice by the producer, engineer or band, or just a happy studio accident, it works and works well.
The harmonies, when they appear, make me think of Queen (the type of complex arrangement of harmonies you could expect when each member of the band is credited with contributing vocals), and the interplay of guitar and bass is a consistent nod to the pioneering fretwork of Yes. The skillful production of Billy Sherwood on this album does not pass unnoticed. The first two minutes of “Walk On Alone” sound like someone mashed up “Fat Bottomed Girls” and “Long Distance Runaround,” with ascending arpeggiated guitar riffs and a bass line with a mind of its own. The similarities do not end there, but it’s definitely where they are most striking. The vocal melodies are sparse throughout the album and rarely do they become a fixture of any of the tracks. Instead they serve as accenting features, guiding or enhancing a song rather than propelling it forward.
If jam-heavy, groove centric rock is your thing, this is the album for you. Mars Hollow does not lean on any one riff or hook for too long; letting the songs evolve organically, rather than forcing an idea into a place it doesn’t belong. Sandwiched between two epic uber-jams  are five tracks exploring vast and varied territory. For the most part this release maintains a swift pace, but it’s not without its soft spots. The fontanel of this album could be found on tracks like “What Have I Done” and “Mind Over Matter”. Both tracks give the listener a chance to catch their breath before “Prelude” into “World In Front Of Me” sweeps you off your feet again and finishes with a bang. All of these songs belong together, bound together on the same album; World in Front of Me stands as a well-structured and coherent release.
4/5 Stars
Key Tracks: Mind Over Matter, Walk On Alone, Voices
Drew Vreeland
June 21, 2011
By Keith "MuzikMan" Hannaleck at June 22, 2011