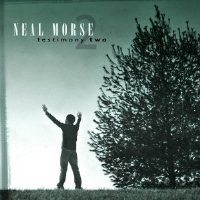 Neal Morse continues on his spiritual journey and shares it with us again on a second installment of his recordings titled Testimony Two, a two disc set. He is joined by his usual stellar performers Mike Portnoy (drums) and Randy George (bass) amongst several other guests including his former band Spock’s Beard on the powerful track “Time Changer”.
I have always appreciated Neal’s music and the tremendous insight into the human spirit based on a solid foundation of faith that he conveys. As most folks know that are familiar with Neal, he is a born again Christian. This event sparked his exit from Spock’s Beard and consequently launched a very successful solo career and several recordings with prog rock super group Transatlantic.
Testimony Two is without a doubt the strongest effort to date from Morse. I have covered his solo career very closely and had the opportunity to share my opinion on most of his work to date. I noticed right from the start that the energy level and music is very powerful. This is a very good thing because Neal has a story to tell and a very important message to relay to listeners. This is his story and it is indeed a compelling one. The turning point in Neal’s life was when his daughter Jayda was born with a hole in her heart and then was healed by a miracle of faith. I think most people would be shaken by such an event and given a new outlook on life, and then renewed spiritually with all the possibilities presented during such an awakening. It was a huge wake up call for Neal and his family and the reason you are reading this review is because of that little girl and how she was healed.
It really is an amazing story and the music that is found on this recording is equal to the task of telling the tale in the most prolific way. The disc opens with “Part Six” which may seem odd at first however if you have Testimony, the first installment, it will make sense. The story continues and unravels in 17 amazing tracks on disc one. As “Overture No. 4” leads into “Time Changer” you know that this album is not going to let up and you are in for a truly great progressive rock experience. One of the more entertaining tracks is “Road Dog Blues”, which is self-explanatory. Not only does Neal find freedom in his new found faith, he can share it with his family because he is not on the tour grind any longer with Spock’s Beard.  I can see Portnoy having the time of his life behind the drum kit on that track.
CD 2 holds three tracks and it’s the highlight of the set, all three emotionally power packed tracks. This is Morse and his band at their very best pumping out prog rock classics “Absolute Beginner”, “Supernatural” and the nearly 25 minute tour de force “Seeds of Gold” to wrap up the session. This set is fantastic and similar to the kind of music and presentation that Neal is accustomed to in recording with Transatlantic.
Neal Morse has made the musical and spiritual statement of his life and career with Testimony Two.
5/5 Stars
Key Tracks: Seeds of Gold, Road Dog Blues, Absolute Beginner
Keith “MuzikMan” Hannaleck
June 6, 2011
By Keith "MuzikMan" Hannaleck at June 09, 2011