Review: Riverside-Memories In My Head 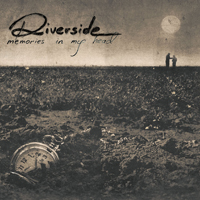 Fans of Riverside residing in America will no longer have to travel to Europe to fetch themselves a copy of the latest release from one of Poland’s premier prog-rock outfits. Formerly available exclusively at concerts, it has been announced this month that the EP Memories In My Head will be available to the general public worldwide, at a price considerably less than a plane ticket across the Atlantic. This short record packs a punch, with three tracks clocking in at just over thirty minutes, and from beginning to end, guides the listener on a journey of sound and space.
“Goodbye Sweet Innocence” starts off real strong setting a favorable tone, but the attraction quickly fades just a few minutes in. The beginning sounds like Tool, only not as complex and enigmatic. It’s a slow, sleepy, ambient jam, propelled by the bass line and accented by strafing, atmospheric keyboards. The track eventually evolves into a choppy, eastern European/Mediterranean-style chug-a-long, a la Mick Karn, only less fluid. The same might be said of the next track as well, for the architecture of “Living in the Past” suggests that they may be doing exactly that. The second track is a little better at what it does, and traditionally the second act is the most dramatic, so it fits. The first several minutes of each track is solid, but they have a hard time keeping the momentum throughout. “Living in the Past” shines where “Good Bye Sweet Innocence” doesn’t by being able to regain some of the energy it started with and channel it into a strong finish.
The singing severely subtracts from my enjoyment of this record. It’s a personal gripe, and one you may not share. It’s not that the singing is BAD, it just seems…misplaced, almost counterproductive. I’m speaking from a technical perspective now, not an aesthetic one. Lyrics do not enhance music like this. This is my opinion, which I believe to be true. Including vocals just forces the listener’s attention away from other (arguably) more meaningful and interesting developments of sound, such as the landscape and the texture that the band creates. It leaves less to the imagination. Just hearing someone else’s story is not as satisfying as having to create your own. I would not discourage anyone from disagreeing, but if there’s one thing holding this album back, this is it. It’s not a very personal listening experience.
They do a good job of developing tension and atmosphere, but fall short when it comes to resolution. The songs don’t climax as much as dissipate. The fog lifts and takes some of the mystery with it. There are numerous engaging parts, and certainly a few aspects that thrill the listener, but for each peak there is a comparable valley. For die-hard fans of Riverside, Memories In My Head will definitely help make the wait until next year’s full length release a little easier. Anyone looking to acquire new tastes may find something on here to enjoy as well, but like most EPs it lacks staying power. It’s enjoyable when it’s on, but quickly forgotten when it’s gone. Average listeners wouldn’t skip any of these tracks if they came on, but may not actively seek them out.
3.5/5 Stars
Key Track: Living In The Past
Drew Vreeland
June 15, 2011
By Keith "MuzikMan" Hannaleck at June 16, 2011