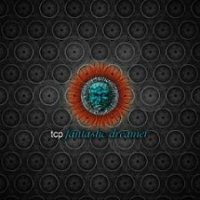 I like when a band name describes itself. It makes forming a relationship a little easier to know what they’re about up front. The Temporal Chaos Project (or TCP for short) is a telling indicator of what the band seems to be shooting for, no matter how you choose to define that first word. It could imply that the band is all over the place rhythmically, that the timing might be wacky; and while the tempos are certainly varied, it’s certainly not enough that I would consider it “chaotic.” So rather than focusing on the stimuli, we will direct our attention inward, to the mind. (The temporal lobe to be precise, where sound and syntax both auditory and visual are processed.) This is where the action is. Fantastic Dreamer is an album of head music, designed to act on this specific part of those squishy gray things in our skulls, the end result being to induce a sort of cognitive dissonance in the mind of the listener. This is the album you toss on, kick back, eyes closed, and let the sweeping sounds dance across the backs of your eyelids. Even the album cover looks like one of those Magic Eye things. If you stare right at the center you may see the surrounding circles begin to spin and bleed into one another.


Sludgy rhythms and dissonant guitars abound on “Schizoid & Guntrip,” the albums lead-off track, bringing the listener back to the King Crimson era track “Happy with What You Have to Be Happy With” (Bonus points to the band for using ‘Schizoid’ in a title, another nod to King Crimson, if this author isn’t mistaken. “21st Century Schizoid Man,” anyone?).


“Ambience for the Active Mind” is exactly what the name implies, and it’s good. Synth textures are deep and dark and it flows along nicely for about 4 minutes before it turns into something stronger, heavier and more metal. Like hearing feathers turn into lead. Take out the vocals and it might be mistaken for a song by Mogwai or Collections of Colonies of Bees or another similar, equally appealing band.


Pound for pound, the titular track “Fantastic Dreamer” has the most to offer any listener who may be new to the sounds of TCP. If you’re strapped for time and want to know what this band is all about, then let this track be your barometer. It snags you with a hook right off the bat, the sawing of an electric fiddle, slightly distorted, which then dissolves into a roller coaster ride of sound. Unlike a roller coaster though, the song doesn’t end up where it started again. “Fantastic Dreamer” hits the ground running and never looks back. I lost track of the instrumentation after I heard what I thought to be a zydeco followed by church bells. This song may not be the sonic equivalent of pickles and ice cream, but it’s damn close.


TCP has often been compared to prog-rock genre giants such as Genesis and Marillion, and while I cannot refute those claims, I feel Pink Floyd and King Crimson to be far more dominant influences, and therefore more appropriate analogues. The slow, athematic breakdowns and spaced-out synth leads are vintage Floyd, and the squealing guitar licks are like Robert Fripp’s, minus all the pedantry. Even if Fantastic Dreamer only makes it through one rotation on your player of choice, it’ll be worth it. TCP isn’t making prog-rock history; they’re preserving it, which at this stage of the game is arguably more important. Every day, artists you’ve never heard of are breaking new musical ground, but it’s bands like TCP who keep us listeners from forgetting where we came from, so to speak.