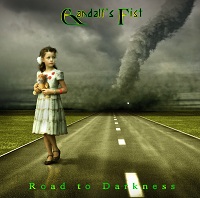 I was surprised to find out that Gandalf’s Fist, wasn’t a metal band. Those metal bands certainly do love their Tolkien. But alas, Gandalf’s Fist is a progressive rock band often reminiscent of Pink Floyd.
Gandalf’s Fist, comprised of Dean (Musics and Generic Warbling) and Luke (Song-writing and Wizard Impressions), released The Master and the Monkey earlier this year. A jam session from that recording led to the creation of their latest release, Road to Darkness. The concept behind the Road to Darkness is a re-imagining of The Wonderful Wizard of Oz by Lyman Frank Baum (how Floyd of them) in which a girl is transported to an alien world by an evil sorcerer. Would you know all of this by listening to it? You certainly get hints to it while listening and by song title, but now you can better picture it as you listen I suppose.
What Gandalf’s does here is reminiscent of Floyd of course, but much of the album is instrumental, which works more for me on most of these tracks. There are some tracks that vary and rock more than older Floyd though. A few of them do have more of a modern prog-rock sound. Really, that element mostly happens with the spacey vocals, so that is why I prefer more of the instrumentals. That said I do feel that there was just a little too much instrumental music for my taste, although those that prefer it will surely find it satisfying.
I generally prefer to have an album be all or nothing, and here it’s about 50/50. It is a nice variation from song to song, and the theme certainly helps that along through Road to Darkness. Like most prog-rock, it does have some moments that are a bit weirder (as to be expected with this concept) than your usual pop/rock. This will likely turn some listeners off, but again it is to be expected with this genre.
The bottom line is, if you’re down with the concept of Road to Darkness works for you and you’re into Pink Floyd influenced music and prog-rock, this album is a good choice. It’s got some fun bits to it, and the more you listen to it, the more you can feel and get into the idea of it. If that doesn’t interest you, it will come off a bit strange. I generally fall somewhere in the middle on this one. At times I enjoyed the idea, others I felt it went a little too far and became more artistic than entertaining. Still, Gandalf’s Fist, has put together a creative and interesting release, and most impressively, very quickly after their previous output. It will be interesting to see if they can continue this wave of creativity.
3.5/5 Stars
Key Tracks: Emerald Eyes, Into the Dark (Containing Emerald Eyes Reprise), Untrodden Ways
Kevin Kozel
July 1, 2011
By Keith "MuzikMan" Hannaleck at July 03, 2011