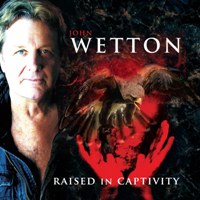 John Wetton has spent over four decades entertaining the world as part of such groups as King Crimson, Uriah Heep and the pop-prog super group Asia, and an almost equal amount of time releasing albums under his own name as well. On his latest solo studio release, Raised in Captivity, Wetton has teamed up with acclaimed producer and multi-instrumentalist Billy Sherwood and is joined by numerous guest musicians, friends and former band mates. Robert Fripp (King Crimson), Steve Hackett (Genesis) and former Asia band mate Geoff Downes, to name just a few, all make appearances. This album could be viewed in one of two ways: as another solo release by an accomplished artist, or as a massive musical think tank co-arbitrated by Wetton and Sherwood; an experimental idea machine. Chances are his past work has already reached your ears in one way or another, so you may not need me to tell you if you’ll like this album or not. You may already know.
For a British artist, Raised In Captivity has a surprisingly American air about it, both stylistically and thematically, influenced perhaps by where it was recorded: Los Angeles, California. Hollywood, baby; what’s more American than that? Like most good albums, it teaches us about the artist, as well as helping us learn a little bit about ourselves in the process. Even though we know he can’t hear us, it’s almost as if Wetton is trying to establish a dialogue between artist and audience, or at least among the audience. On this release, John Wetton reveals a little about himself and a little more about the world as he sees it.
What makes this album a more personal, autobiographical experience, is how he doesn’t shy away from naming names or locations. Unlike some songwriters, he doesn’t get sucked into a vortex of meaningless personal pronouns. Using “He,” “She,” “You, “Me” too often can render a thoughtful and heartfelt subject virtually meaningless for all its lyrical vagaries. The flip-side of this coin is that too much personal detail, too many specifics, can make the song inaccessible to the listener, alienating them from the experience that they’re supposed to be drawn into. Wetton toes a fine line between these two extremes.
The opening track, “Lost For Words,” provides the listener with very specific settings. “Pete’s apartment overlooking Public Square” may not be somewhere we’ve all been, and “backstage limos” might not be a luxury most of us have enjoyed, but “Lost For Words” is certainly something we’ve all felt before, so on the opening track we are immediately confronted with a mix of the strange and the familiar. One of the hardest rocking tracks on the album, “Lost For Words” hits the ground running and definitely encourages head banging more than lyrical speculation. From there the album branches out into more universal themes, returning occasionally to the personal narrative, retaining a hard rock feel with a few well-placed slower numbers (ballads, you may call them) to help pace the album, which runs a little long.
“Raised in Captivity” and “The Human Condition” both seem to capture the angst and uncertainty that comes with modern life at the beginning of the 21st century, which seems to be the overall theme of this release. Rarely does the title of an album so deftly encapsulate the contents. To some extent, we are ALL raised in captivity. Like animals in a zoo or inmates in a prison, we are held captive by our beliefs and ideas, the expectations of our families and communities and the desire to balance what feels “right” with what feels “good”. The title track deals with this on a personal level, how Wetton himself views the captivity in which he was raised. “Am I to blame for what was done to me?” he sings, which begs the question to what extent is anyone responsible for the surroundings in which they grew up; for the environment of which they are a product? “The Human Condition” deals with how he sees this problem manifested in society, and how any forward thinking , sensitive individual may react to what is by all appearances a world gone completely crazy.
As Henry Rollins might say, “If you’re not mad, you’re not paying attention.” But John Wetton doesn’t seem mad. More like concerned and slightly confused, as if how can anyone explain how this all came to pass? It is important to note however, that these are not cynical or accusatory songs. They remain positive in the face of chaos and uncertainty which betrays a level of confidence we don’t often see, different from the usual cocksure bravado found in rock and roll. This release is worth the time.
4/5 Stars
Key Tracks: The Human Condition, Lost For Words, The Last Night of My Life
Drew Vreeland
July 12, 2011
By Keith "MuzikMan" Hannaleck at July 13, 2011