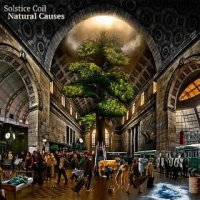 Solstice Coil has just released their new album, Natural Causes, the long awaited follow-up to the progressive rocker band from Israel’s 2005 debut album. The well designed album cover is said to contain an image relating to each track on the disc. If this very large, almost cluttered piece of artwork is an indication of what is on this album, people better prepare themselves for quite the experience.
The album begins with “Question Irrelevant," a song about being confused and questioning the happenings in one’s life. What is really remarkable on this track is the guitar in the second half of the song, mostly toward the end. It gets really tight at one point for a good amount of time and the vocals cut out showcasing the guitarist’s skill.
"Replacing People" is a track that is surprisingly soft and mellow. It is about replacing those in your life and finding new people to be amused by you and your old tricks. It’s got a slightly sad tone, but still, the light feeling makes it a nice change of pace from the rest of the album without straying too far.
The album really gains a more “rock” feel with the song “Moral Oxidation.” It features the tight guitars showcased elsewhere on the album; However, with the increased speed and harder music, the tight guitars blend in a way that really makes them shine, allowing them to be fully appreciated.
Natural Causes is an album that gives listeners a good variety of progressive rock and shows Solstice Coil’s simple versatility without being all over the music spectrum. The lyrics all keep with the same pace and feel throughout the album but the music backing these songs is where that great variety is brought in to play. The band definitely should not wait another six years before releasing another.
4 out of 5 Stars
Key Tracks- Question Irrelevant, Replacing People, Moral Oxidation
Ashley Arseneau
July 21, 2011
By Keith "MuzikMan" Hannaleck at July 22, 2011