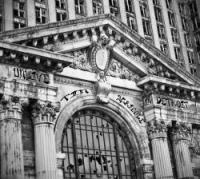 The members of Tin Scribble are all very well versed in their instrument of choice as well as having well rounded music knowledge, some holding college degrees in the field.  Each has a rich and diverse background and are all from Detroit.  Tin Scribble’s talent is demonstrated well in Unlive From A Dead City.
The album opens with “schizophonia” an instrumental piece.  Here, the title defines the song; it begins with slow notes on the piano and expands into an electroacoustic sound.  The second track, “Abandon,” starts quickly and moves in a much different direction than the intro track.  The next couple of tracks slow the pace.  A couple more instrumental pieces are blended in, including an impressive guitar picking track, “Guitaristic at Ease.”
This is a prog rock album through and through.  It solidly contains all the elements of progressive rock. The songs have lengthy musical interludes highlighted by overstated dynamics. There doesn’t appear to be rules for melodies or specific rhythms, the music just flows in a natural progression. Other types of music are woven in, sounds from jazz or folk music and electronic elements such as keyboards and synthesizers.  The album as a whole creates an ambient soundscape, each song melts into the next in a conscious flow.
Fans of progressive rock will thoroughly enjoy Unlive From A Dead City but for those not familiar with this genre, give this album at least two listens before judging.
If you want to expand your ear for music Unlive From A Dead City will push the boundaries.
4.5/5 Stars
Key Tracks: Separate Silence, Breakable, For a While
Hannah Carter
July 13, 2011
By Keith "MuzikMan" Hannaleck at July 16, 2011