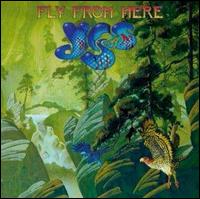 The good news is: Fly From Here still sounds like Yes. The bad news is: well…it may not be so bad after all. Purists and die-hards may balk at the idea of Anderson being absent from the line up this time around, but even without him it’s as close to the original line up as you could expect at such a late stage in their career. You know the story: illustrious band reunites to make a new album; Chris Squire, Steve Howe and Alan White all return to their familiar posts (Bass, Guitar and Drums, respectively) and are accompanied by Geoff Downes and Oliver Wakeman on Keys. The rest of the story however, reads like it was ripped straight from the plot of the movie Rock Star (the Marky Mark vehicle), which was itself ripped from real life events of to begin with.

Fifteen years ago Judas Priest paved the way and showed us all that if you were a World Famous Band, it was OK to replace your seemingly irreplaceable lead singer with (logically) his most qualified counterpart: the singer for your band’s tribute band. Yes’s newest addition from the great white north, Canadian singer Benoît David, was called up to the majors as it were, after respiratory problems forced Jon Anderson out of the fold sometime in 2008. It is this critics understanding that this was not the most amiable parting of the ways, and that some contention seems to exist between the remaining members and their now former lead singer. Far from being just a cheap imitation, singer David is a talented vocalist in his own right, and seems on this album almost subdued. He does not steal the spotlight. Rather, he lets himself and his own elements of style get assimilated into the larger organism that is the Yes Sound. Of course those with a fine ear for detail will notice the discrepancy, but to the casual observer the transition is nearly seamless. I find it best to let the music speak for itself and in this instance it holds its own quite well.

Of all the albums in the Yes back catalogue, which is considerable to say the least, the most appropriate analogue would be their 1980 album Drama. In addition to the fact that these are the only two albums which feature a singer OTHER than Jon Anderson, acclaimed producer Trevor Horn is on board for both, and the only appearance Geoff Downes makes behind the keys is on these two albums. Horn’s production is not unique to just these two albums. He also produced 1983’s wildly successful album 90125 which contained the hit “Owner of a Lonely Heart”, as well as the substantially less (commercially) successful follow up Big Generator, which for my money is still a solid album in its own right. “I’m Running” alone almost makes the album worthwhile, and “Final Eyes” wins points in my book for the homophonic Final eyes/finalize device that keeps recurring in the refrain, but I digress…my point is Big Generator might get a bad rap because, like most things from the late 80’s, it betrays the signs of a decade beginning to turn stale. No, wait – my point was that Drama and Fly From Here are similar albums, if you’re speaking in terms of Yes standards, only this time around it doesn’t sound like Sting is sitting in on their recording sessions.

The level of musicianship on Fly From Here is vintage Yes; how these artists have managed to remain at the top of their game for so long is anybody’s guess, but this album marks a return to form for the band known for plunging new depths and soaring to new heights. The trademark A-side length track (in this case, the titular “Fly From Here” opus) has been segmented into six parts, making it a little more accessible for those of us who don’t have 25 minutes in a row to devote to a masterful prog-rock barnburner. They’ve grown out of the flashy sound and style that any band that lived through the 80’s invariably acquired, and grown back into the warmer, proto-digital sound of the 70’s.

The most engaging section of this oeuvre is perhaps “Fly From Here pt. III – Madman at the Screens,” in which the themes developed in the introduction to the album (“Fly From Here – Overture”) are revisited and developed at greater length. “The Man You Always Wanted Me To Be” is somewhat repetitive and predictable and may benefit for being a minute shorter, but it’s far from unlistenable. In fact, the same could be said about “Life on a Film Set.” The supporting instrumentation is more appealing than on the track before it, which somehow makes repetition more bearable. “Hour of Need” is pound for pound the sweetest track on the album, with severely stripped down percussion and emphasis on the vocal harmonies and acoustic guitar accompaniment.

Bottom line is: Fly From Here has all the symptoms of a trademark Yes album down to the Roger Dean artwork (which interestingly enough, just like the composition of this album, was begun several decades ago and only recently finished), and while there may be nothing that quite matches the magic of Fragile, and nothing living up to the pop expectations set by 90125 it is well worth the time of fans old and new. It’s certainly no worse than some of their past efforts.
4.5/5 Stars

Key Tracks: FFH pt III – Madman at the Screens, Hour of Need, Into the Storm