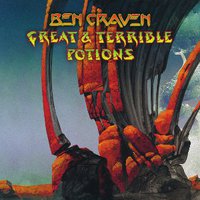 Ben Craven’s latest release, Great & Terrible Potions, has been five years in the making. Taking his time in the land down under, this singer/songwriter/multi-instrumentalist has crafted a fine and formidable album that belongs in the library of anyone who fancies themselves a collector or connoisseur of culture from exotic locales. This album boasts cover art by Roger Dean, so in a way it’s already been given the progressive seal of approval. Seen as a psychedelic rendering of what I can only assume to be the Australian outback, it gives the right look to an album which already has the right sound, while representing a little of the artist as an individual. In addition to writing it all, Craven plays every part himself, which is only remarkable considering how well the whole thing comes together.

It’s prog rock infused with a symphonic element, the arrangement is almost orchestral. G&TP doesn’t lean heavily on the lyrical aspect of songwriting, which is nice. The vocals are Patton-esque, but less erratic and not as absurd. Unlike Mike, it doesn’t sound like he’s trying to freak anyone out on purpose. Ben Craven isn’t trying to force pictures into your head, his own pictures that he created. Rather, he lets the music speak for itself and leaves it up to the listener to form their own mental images to pair with these tracks. The fact that he collaborated with such a highly regarded concept artist as Roger Dean (known primarily for his work on like every Yes album cover ever, as well as contributing artwork for bands like The Gun, Budgie and Uriah Heep as well as allegedly inspiring the landscapes seen in the film Avatar) can give you some insight as to the intended aesthetic of his imaginary realm, but in the end it’s highly subjective, which is greatly to this albums credit.
Too often one can fall into the trap of trying to force visions upon the listener and that’s when problems arise. Craven states boldly on his website that he creates cinema for the ears (one clever critic described the album as sounding like the soundtrack to Star Wars if Pink Floyd had written it), and just like a film director musicians need to know when to be direct and when to let subtlety speak for itself. Keeping that proclamation in mind, I decided to approach this album from a cinematic standpoint, and tried to find the appropriate silver screen analogues to these epic tracks.
“Nobody Dies Forever” sounds like it was tailored to be the opening theme to the next James Bond thriller, the one in which 007 is covertly dosed with LSD and must track down the culprit while suffering the throes of an unsolicited acid trip (which as you may or may not know, is the worst kind of acid trip). It is presented in two parts (appropriately/predictably enough “Nobody Dies Forever Part 1” and “Nobody Dies Forever Part 2”) which practically bookend the album, one appearing just after the introduction as track two and the second just before the end at track eight. The whole album is twelve tracks, but I’m not counting the last three (tracks 10-12) as they are just alternate edits of earlier songs. Dubbed “Single Edits,” they have been paired down considerably to make them more accessible to mainstream commercial radio, which you can’t really complain about since they’re included almost as an afterthought or bonus material, and their full grown cousins are what comprise the meat of Great & Terrible Potions.
“Aquamarine,” (before the guitar comes in at about the two minute mark) is what you’d expect to hear playing in a Wes Anderson film during the hardest part of the protagonists struggle, or during their moment of self-realization. You know, the moment when the main character comes to terms with some unpleasant but inevitable truth or aspect of their personality that until that point everyone but them had accepted.
My favorite track on the album earned that designation by its title alone. “No Specific Harm” is the Indiana Jones song of the album. And I don’t mean in the anthemic John Williams epic score sense. I mean it’s a track perfectly suited to exploring hidden desert crypts and unearthing various Arabian antiquities. The tone and texture are enhanced by lyrics like “I stork the pharaoh’s palace/I fill the poison chalice.” imbuing the song with an air of vaguely distant danger. Hot on its heels, “Solace” seems to break from the mold cast by the rest of the album, but after a few minutes the familiar arching electric guitar returns to complement the nylon string acoustic that seemed like such a departure in the beginning. Think of this as an intermission of sorts.
Basically all you have to do is press play and this album does the rest, it doesn’t take a lot of effort to enjoy Great & Terrible Potions. It’s like the soundtrack to a movie you never knew you wanted to see. And lastly, it’s nice to see someone down under who believes that AC/DC and INXS don’t have to be the nation’s greatest cultural exports.
4/5 Stars
Key Tracks: Nobody Dies Forever Parts 1 & 2, No Specific Harm, Great & Terrible Potions
Drew Vreeland
August 4, 2011