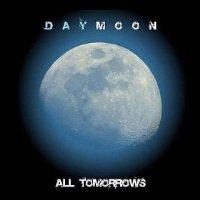 Hailing from Portugal, Daymoon has a sound that cannot be so easily geographically or stylistically pegged. Whether you want to call it progressive rock or symphonic rock, Daymoon’s music is full of musical inconsistencies, from unlikely harmonic changes to complex time signatures. Although the title track does not set you up for the musical maelstrom that is All Tomorrows, the following “TranscendenZ” does, and is much more interesting and listenable. There’s jazzy sax, rustling drums, overdriven guitar lines, and none of the vocals that came on too strong in the first track.
“Human Again” begins with intricate polyphony, its pizzicato guitar lines playing off of tinkling triangles and glockenspiels. As with its predecessor, there’s lush instrumentation, fugal explosions, and epic walls of sound. The chugging guitar chords and eerie keys make for such an interesting listen that the lackluster lyrics and underwhelming vocal performance spoils a lot of what the song works to create. At over seven minutes long, the song manages to sustain interest through an a capella breakdown and jam session replete with swooning guitar and shimmering soundscapes. “Marrakech” is short and not exactly sweet. Named after a city in Morocco, you’d expect a more obvious North African feel, but instead you get something like an experimental Beatles b-side. The eleven-minute “Sorry” comes next, its whirling keys and muted electric guitar complementing the sinister Sprechgesang-style melodies. The song slowly builds in a strangely symphonic way—flutes carry an almost parodic circus tune until a brief section that sounds like when my Girl Scouts troop would fake-summon-the-rains by snapping our fingers and rubbing our hands together in turn. But this soon turns into a pop tune that somehow dissolves back into the chaos the song began with, leaving you feeling kind of schizophrenic, but perhaps pleasantly so. “Bell Jar” follows up sounding nothing like the book by Sylvia Plath—which is probably a good thing. This is the only song on the album that you could date within the past ten years, its electronic drum kit beats lending an interesting groove to an otherwise understated but enjoyable song. Towards the end it sounds like Pretty Hate Machine-era Nine Inch Nails, if Trent Reznor were less violently angry and more into chimes.
“First Rain” features double-stopped acoustic guitar riffs, and “Arklow” calls back on the more metal sounds of “All Tomorrows” with whining guitars and frequent tempo changes. “News From the Outside” is creepy and dissonant with double-tracked vocals and softened drum beats throughout that make it musically less diverse, but also easier to swallow. The thirteen-and-a-half minute “The Sum” closes the album with an orchestral rocker unlike anything I’ve heard. A rollicking melody is voiced on at least three different instruments at once with the distorted guitar and mellifluous flute sounding surprisingly congruent. It’s like the prog rock version of Prokofiev’s “Peter and the Wolf”—that’s the only way to describe it. With everything from flugelhorn to sax, and stylings that range the continents, All Tomorrows is a maddening, majestic album. Daymoon comprises nine self-described “regressive rockers” whose mission statement is “to delight the world with an incoherent concoction of music from across the past millennium. Mission accomplished.
3.5 Stars
Key Tracks: Human Again, Bell Jar, The Sum
Sarah Madges
August 5, 2011