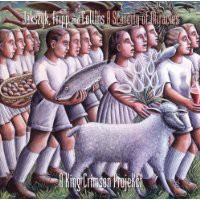 Those with a penchant for sweeping soundscapes and an ear for antiquated stringed instruments from the orient may do well to acquaint themselves with A Scarcity of Miracles. During the late 1990’s, King Crimson “fraKctalized” into several spin-off side projects, the seventh permutation of which we are witness to with this latest release by Jakszyk, Fripp and Collins. Though the project remains similar enough to the original to be included under the King Crimson umbrella of acceptable sonic substitutes, it certainly has its own agenda. More emphasis is placed on song writing and overall composition than on improvisation. Dynamics still play a large part in creating atmosphere though. If pressured to describe this album in one word, it would be: immersive.
Fripp injects his trademark guitar sound into more than a few of the tracks, but his presence isn’t the focus. Never a needless noodle-fest, Fripps’s licks are determinately placed to enhance and support what are already well constructed, well executed songs. The contributions of Mel Collins, former King Crimson saxophonist, do more to sculpt the sound of this album as they feature prominently on every track. Sultry, mournful, at times melancholy, the saxophone defines the environment and Jakszyk’s lyrics and throaty vocals lend a dreary, doleful quality to each tune. The pace of the album is guided by the subtle hand of the rhythm section, comprised of Tony Levin (Bass, Chapman Stick) and Gavin Harrison (Drums, Percussion), whose laid back grooves tether the rest of the textures to something organic and substantial.


The primary tone of A Scarcity of Miracles is dark and vaguely ominous. The synth textures create tension and add an element of suspense to tracks that are already themselves mysterious and brooding. “Secrets” captures the eerie mood which typifies this album perfectly. After nearly four minutes of slow build up, percussion is introduced to release the tension. The unusual time signature (7/4) may be hard to pick up on at first but once you have it, it’s hard to lose. “Secrets” is followed up by “This House,” a seamless continuation of the pervious track that has lofty guitar licks paired with sax melodies so masterfully that at times you can’t tell which is which and vocal harmonies blended with spacy synthesized soundscapes that so closely resemble one another. It gets a little heavier with “The Other Man,” which comes closest to that classic Crimson sound which the rest of the album only hints at. It’s not like listening to ASOM you’ll be able to forget where the musicians came from, but “The Other Man,” more than any other track, lets you know where they’ve been.


Don’t expect speedy payoffs with this album. A Scarcity of Miracles is one you must really let yourself sink into. Thankfully, it’s almost easier done than said as each track segues beautifully into the next making for a completely unified and seamless listening experience. I immediately liked it better the second time around, and the pleasure increased with each subsequent spin. I believe this will be the case for most listeners, each time revealing subtle nuances previously missed. Albums like this rarely reach the point of diminishing returns. Though not technically complex or cluttered, there is a lot to take in on these six tracks. More than most should expect to pick up on in one go-round. Be patient—both with this album and with yourself—and the rewards will be comparable to the time you put in.
4/5 Stars
Key Tracks: Secrets, The Other Man, The Light of Day
Drew Vreeland
July 30, 2011
By Keith "MuzikMan" Hannaleck at August 02, 2011