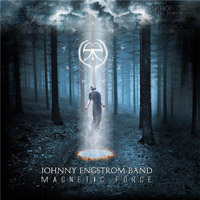 Maybe there is something in the water or in the atmosphere that makes Sweden the home to such amazing and talented bands, especially ones that play rock and metal.  Whatever it is, the Johnny Engstrom Band is no exception.  The Swedish trio’s latest release Magnetic Force is fantastically entertaining and engaging.

I am very fond of concept albums and one involving alien abductions that take one on a journey  through inner and outer space is a very attractive to me.  “Oblivion Part I” begins the odyssey.  The opening song is weird and haunting with an appropriate strange beginning.  Also, it is a pretty epic song not just in scope, but in length as well by clocking in at just less than 17 minutes.  The best part is that the song never gets stale and keeps your attention throughout.  It transitions seamlessly into the next song, “Under Haunted Skies.”  The excellent beginning creates a wonderfully eerie atmosphere for the song.  It is like a chase to keep your sanity amidst chaotic forces.

The guys really bring it on the title track “Magnetic Force.”  It has a crushing opening that moves into being more melodic for the rest of the song.  Though it may be melodic, it still is able to give a sense of menace. It is very well done.  The menacing is dropped for the song “Endlessly.”  The vocals stood out to me on this track because the backing vocals complimented the main ones very nicely.  “River Oaks” focuses less on being dark and heavy and more on being harmonious with plenty of emotion.

The heaviness is not gone for long with the next song “Wounded.”  It has a great rocking opening that provides the dark atmosphere and displays the musical talents of the band.  “Paradise” is a splendid mix of melodic and intense sounds.  The odyssey ends with “Oblivion Part II.”  It is not as long as the first part, but it gets up there by clocking in around the 14 minute mark.  It is a fantastic conclusion and it is what progressive rock should be.

There are so many positive things to say about Johnny Engstrom Band’s Magnetic Force that is difficult to pick the right ones.  Simply, this is a superb album that is a pleasure to listen to.  This album is not to be missed for all of the progressive fans out there.  You would be doing your ears a disservice.