Review: Jimi Hendrix-Live At The Isle of Wight-Blue Wild Angel 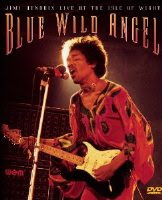 The career of Jimi Hendrix is well documented and the story continues with another wave of remasters and videos for enthusiasts, collectors and music lovers alike. With Live At The Isle of Wight-Blue Wild Angel you get a DVD (182 minutes) with previously unreleased film culled from the vast archives of Academy Award winning director Murray Lenner.

Like with any other live footage of Hendrix you get a man in his element performing sizzling hot rock-blues-psychedelic tunes like only he could play them. And you can always count on each version having its own unique sound and “roads less traveled” from a purely musically vantage point. If you listen to any Hendrix live tracks none are ever the same. He was very advanced much like his contemporaries from different genres such as icons like Miles Davis and John Coltrane. He had the ability to create a style and path for others to follow. But this is about more than the music which makes it more compelling and the reason it should become part of your collection.

Personally I never get tired of this endless supply of music from the legendary guitar god Hendrix. The live experience was much different than what Jimi released from the studio. The one thing that you can always count on is a relentless flow of guitar virtuoso and improvisation. Jimi was an elite entertainer and the guitar became an extension of his personality on stage.

This DVD has many different things to offer the listener including a specially mixed 5.1 Surround Sound version from Jimi’s engineer Eddie Kramer. The beginning of the DVD lets you into the world of Jimi and his band backstage, the promoter’s world prior to the event, and a better understanding of what Murray Lenner endured to get the footage you are enjoying. That view and insight certainly provides a new found appreciation for live concert footage at the Isle of Wight event that took place in 1970. This particular event drew 600,000 people, far beyond what anyone could have imagined or anticipated. It was mentioned during the run of the DVD that Jimi and his band could not see very far out into the crowd because it extended out so far. There are several points during the concert when Jimi is speaking to his road crew because of all the difficulties with the sound. In fact at the end of the concert Jimi literally throws his guitar down on the stage and walks off in total frustration. He always wanted to give his best and the technical issues they experience were simply unacceptable to the talented musician.

The insight that this DVD provides you is immeasurable not to mention some incredible performances from Hendrix, drummer Mitch Mitchell and bass player Billy Cox. One of the more interesting sequences is when the band is ripping through a wild version of “Foxey Lady” when Jimi has to go behind the speakers to change his ripped pants after doing the splits. He keeps playing mind you, which I found amazing. There are 15 tracks encompassing this DVD including a bonus, memorabilia section and a separate filming at different stage angles. I found it interesting how Hendrix kicked off the concert with “God Save The Queen,” which was not part of the set list originally. Jimi was always full of surprises and he had a way of turning whatever he was playing into a masterpiece all his own and this song was no exception. Again, as I have witnessed before on live footage, “Machine Gun” was incredible. It was a track built for rocking improvisation. The closing track “In From The Storm,” which was one of his newer tracks at the time, is a flat out rocker and surely a revelation to the audience in attendance. There must have been a lot of anticipation from listeners at the time after hearing this song that there would be much more to come. Sadly Jimi would leave us shortly thereafter to let us all ponder what could have been for eternity.

The film restoration is outstanding on this footage. There are some spots that could not be removed due to permanent damage however it serves as a watermark like on some rare currency from a foreign land. This was an absolute joy to view and again I was given another view of the legendary Hendrix I had never considered. I was already aware of his greatness and this film added more proof positive that there never was nor will there ever be another performer like Jimi Hendrix live or in the studio.

This is a must have DVD for all Hendrix fans!

Key Tracks: Foxey Lady, In From The Storm, Machine Gun