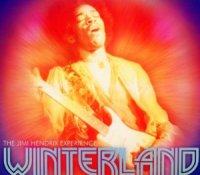 It was 1968 and The Jimi Hendrix Experience played six sold out shows at Bill Graham’s Winterland in San Francisco. This box set version has 4 discs and the “exclusive” Amazon version, of course not available for review purposes, features an additional disc with 5 tracks. I was perfectly happy listening to this version of the box set.

Winterland, although offering the same tracks several times, is an incredibly good collection of live recordings. The fact that each track is entirely different makes it all worthwhile. Jimi and his band were on fire during these performances and what this documents is the amazing diversity and musicianship that these three men had at their command. A perfect example of this musical mosaic is the track “Tax Free”. If you listen to the tracks presented on Disc 1 and 2 it’s like they are two different songs. So if you are thinking about the reasons not to buy this box set, there really are none. Yes many of the same tracks get the run through however I can guarantee each one will have a different sound and flavor. You simply need to pay attention and listen more than once to catch every nuance or change. It does not take a rocket scientist to recognize the differences either.

What you also get is a glimpse at is Jimi interacting with his audience and stressing the fact how important it was to him and the band how they sounded and why they would tune up between songs. He also mentions they reason they do not play too loud is because he respected the audiences ears and endeavored to give them quality without being overbearing or distorting their sound. It was great to hear all of this conversation and how important it was to Jimi how he presented his art.

I have listened to so much of the Hendrix cannon now its ridiculous and I can say without any regret that I have enjoyed every second of it and continue to learn more about the artist, the difference between the studio and live versions of the tracks and more. The radio interviews I have listened to have been insightful as well and on Disc 4,  backstage at Boston Garden from 11/16/68, lets you inside the head of a free spirited musical genius.

You get all the classics like “Foxey Lady,”  “Fire,” “Hey Joe,” “Purple Haze” and some smoking hot versions of blues burners like “Red House” and “Killing Floor”. Jimi reminds the audiences that what he is interpreting is the blues. Luckily for us and all the folks back in the 60s what you heard was a fusion of rock, blues, jazz and psychedelic. So when you really look at everything Hendrix did you have to tip your hat to him and acknowledge the fact that he blazed so many trails…progressive rock, jam band, blues rock, jazz fusion, the list could easily go on forever.

If you love Hendrix then you have to own this box set, but then again if you like to rock, it’s something worth hearing. Do you love live music? Well need I say anymore how crazy good this music was and still is? As I have totally immersed myself in the Hendrix “experience” my interest or hunger for this music has never subsided, in fact, the more I hear it the more I want it.

Key Tracks: Foxey Lady, In From The Storm, Machine Gun