Review: Jimi Hendrix-Hendrix In The West 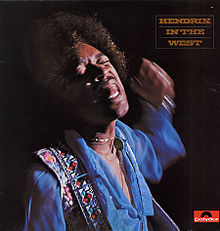 “A bit more volume on this one, Charlie. He’s gonna need it…” The first thing you hear on this record and the stage is suddenly set.
Hendrix In The West is a live compilation record gathering hits from various gigs in California circa spring 1969 – summer 1970, originally released in 1972, re-mastered and re-released with bonus tracks to keep you coming back. For live recordings, they are stunning. The band is mixed well and the level of adoration radiating from the crowd(s) is palpable. All in all, this album showcases a master at the top of his game. Flanked by Billy Cox on bass and Mitch Mitchell on drums, each talented musicians in their own right, this stripped down trio prove once again that Rock and Roll in its rawest form is still pretty rad.
There are several reasons why this album is awesome, like the intro track where he excuses himself and the band to the audience to “tune up” and then proceeds to shred a mutilated version of “My Country ‘tis of Thee” to a smattering of cheers and applause. I’d salute that. Another is the sheer force of energy which is clearly present on every track. It’s rare to bear witness to several individuals simultaneously being the best they can be, and this is what this album offers.
Though the recordings were all taken from three non-consecutive dates several months apart from each other, there is a consistency of sound quality that is amazing, and the arrangement of tracks on the album is virtually seamless. If I didn’t know better, and you told me I was listening to bits and pieces of several shows rather than a continuous set, I’d call you a liar to your face.
What really makes Hendrix in the West an endearing listening experience is the moments where we get just Jimi, like in his interaction with (and directions to) the crowd: those brief asides where we get a closer glimpse of his humanity, his sense of humor. There’s something surreal about hearing the man speak conversationally, like watching a god clip his toenails. He says some funny stuff, without even trying it seems, which makes it even more effective. Some notable Jimi quotes include:
“I’d like to dedicate this one to all the plain clothes police officers, and other goofballs…”
“…Matter of fact it would sound better if you would stand up for your country and your beliefs and start singing. And if you don’t…F#%k it…”
“When I say ‘toilet paper,’ that’s when you can roll it out…” [a reference to the evening’s non-existent program]
Another gem of this record is the cover songs which are included. It’s a refreshing departure to hear Hendrix’s interpretation of such classics as “Sgt. Pepper’s Lonely Hearts Club Band,” “Johnny B. Goode,” and “Blue Suede Shoes.” Old standards like “Voodoo Child” and “Fire” are still on the set list (because if those were your songs, why wouldn’t you play them any and every chance you had?).
Hendrix In The West belongs on the shelf of any serious collector, especially the kind that get their rocks off on old bootlegs. These are the hits as they’re being conceived, and the digital re-issue contains several bonus tracks (among which are “Spanish Castle Magic” and “I Don’t Live Today”). It’s entirely possible that the songs as you hear them on this record were never played exactly the same way again. And that’s something.
4/5 Stars
Key Tracks: Red House, I Don’t Live Today, Spanish Castle Magic
Drew Vreeland
September 8, 2011
By Keith "MuzikMan" Hannaleck at September 09, 2011