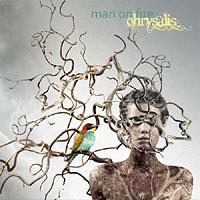 Chrysalis is Man On Fire’s first release in about six years and it is great to have them back.  When bands take extended breaks like this between albums, the expectations for an amazing album to be produced are huge.  Man On Fire does not disappoint.  Chrysalis is one of the those albums that gets better each time and takes multiple listens to appreciate all that is happening in the songs.
Man On Fire’s Chrysalis begins on a high note with “Repeat It.”  It is definitely one of the highlights of the album and sets the quality standard for the remainder of the songs.  With its hypnotic base line and clean and subtle vocals, their brand of progressive rock is excellent.  “In a Sense” prominently features the violin adding a new sound, and then there are the multiple vocals.  They are a joy to listen to as they trade off each other in harmony.  “A (Post-Apocalyptic) Bedtime Story” lives up to its name by providing haunting music and lyrics.  It is what one would expect from a song with that title.
The title track “Chrysalis” is broken down into four parts and it is more evidence of just how wonderful this album is.  “Part 1: In Between The Lines” has some of the best music on the album.  It is so good that I think that the lyrics are an extra.  Also, it has been some time since a piano has rocked this hard.  The music of “Part 2: Pundits” is an extension of the first part, while making the sound heavier.  The guitar and piano mix smoothly and there is a nice touch with the song ending how it began.  “Part 3: The Muse Returns” has a futuristic feel to it and lets the music do all the talking.  “Part 4: Free To Fall” is a hard rocking song that caps it all off.
“The Projectionist” is another quality song that keeps the dark and heavy atmosphere already established on the album.  “Tear Gas” keeps the music fresh by switching up the sound.  The reflective lyrics also help to propel this song to one of the tops of the album. “Outside the war machine, it’s a lonely place,” indeed.  “Higher Than Mountains” and “Gravity” bring the album to an end with their slower tempos and lighter atmospheres.
Man On Fire’s Chrysalis is set for release around the beginning of Autumn. I know it is early, but this album is going to be a hard one to surpass and could be one of the top albums of the season.  There are many words of praise I could go on and on for this album, but I will give you an example instead.  Simply put, passing by this album is like passing by an oasis when you are running out of water.   It is that good.
5/5 Stars
Key Tracks: Repeat It, In A Sense, Chrysalis Parts 1-4, Tear Gas
Brian McKinnon
September 4, 2011
By Keith "MuzikMan" Hannaleck at September 05, 2011