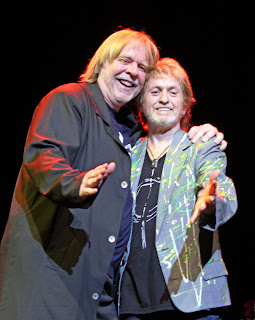 Asheville, NC - Much to the delight of fortunate music fans in the Eastern part of North America, music legends and former YES members Jon Anderson and Rick Wakeman will be playing a select number of engagements this coming Fall 2011. The legendary duo performed a series of successful concerts in the UK in 2010 in support of their critically acclaimed CD release 'The Living Tree', and are now bringing their highly anticipated show to America!

Having worked together on and off since 1971's groundbreaking YES masterwork 'Fragile', Jon Anderson and Rick Wakeman have traveled similar musical paths that have eventually and happily led their careers back together again! Now once again, the duo promise a magical evening of music and humor for all who attend! “Expect a night of music, full of YES classics and new adventures in song from 'The Living Tree' album and moments of brilliance, humor and affection borne from a friendship and musical partnership that has lasted 40 years”, says Jon. "We knew from the responses on the last YES tour that the acoustic section was extremely popular and that many of the pieces could be re-arranged and adapted to make very interesting and hopefully enjoyable new ways of playing YES music and our own music," adds Rick.

The tour is being produced by Metropolitan Talent Presents and is booked by Keith Naisbitt of Los Angeles based Agency for the Performing Arts. John Scher co-CEO of Metropolitan says, "We are incredibly proud to be presenting the North American debut of this legendary duo! Jon and Rick ARE the voice and sound of YES, as well as famously successful solo performers! This tour will be areal treat for their legions of fans."

Here's what the UK press has said about the Anderson Wakeman tour:

“One of the songs played on the night was the impressive '23/24/11' (from Anderson Wakeman - The Living Tree), the true story of a soldier out in Afghanistan who had that amount of time left to serve as his tour of duty. Looking round at the audience there wasn't a dry eye left in the house. Once more the combination of Jon's amazing vocal style and the lyrics work perfectly.” - Ian D. Hall, LS Media, UK

“Anderson showed yet again that he is the true voice of YES...Wakeman provided the keyboard wizardry and a stream of stories.” - Ian Harvey, Express & Star, UK