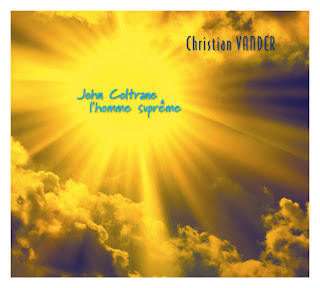 “On July 17, 1967, time stopped. The great saxophone player John Coltrane left us. I was lucky enough to discover, at a very young age, an exceptional musician. The beauty, the spirituality, the strength, the softness, as well as the fragility of notes. The expression of that sound which spoke to me like a voice. From that moment on, he became my daily bread. Indispensable. No one can ignore the immensity of his visionary works. It still resonates in all of today's musical productions, and certainly in those of tomorrow.

In 1997, I had a dream, a record, dedicated to John Coltrane. A child painted the sun on a white cardboard, and below that sun, he wrote a title in blue... John Coltrane l’homme suprême.”

This CD was recorded in 2011, day after day, between July 17, the date in which John Coltrane departed, and July 21, the day on which his funeral was held. On each day, an offering, a musical, poetic gift, for him, was created in real time. On the 21st at midnight, the record was completed.

"For my work, it is still Coltrane who actually gives me the real material to work on, to be able to move on." Christian Vander