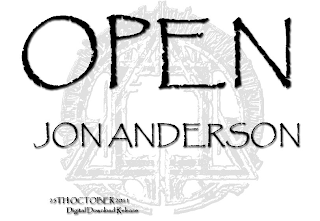 Asheville, NC – Much to the excitement of music fans across the globe, on October 25, 2011 legendary YES vocalist Jon Anderson will release as a digital download an epic musical work entitled "OPEN." A return to the long-form composition that Jon Anderson is best known for, (“Close To The Edge”, “Gates of Delirium”, "Revealing" and “Awaken”), OPEN is a 21-minute exhilarating musical journey; a pioneering effort that weaves intricate melodic and harmonic themes within a classical music framework whilst showcasing Anderson's iconic vocals and timeless melodies throughout. In many ways OPEN is a return to Jon Anderson's musical roots, as YES music continually flows through his veins, making it only natural to revisit now and again. Coupled with wonderful orchestration by his neighbor and good friend Stefan Podell, messages of peace, love, light and freedom are further explored within OPEN, making listening an uplifting and joyous experience!

" 'Forever taken to that place of understanding,' are the first lyrics of 'OPEN', as though I am always remembering my true musical journey. To create this work, I sat with my 19th Century guitar and strummed ideas last spring 2010. Songs just poured out of me that week, and before I knew it I had created a long form musical idea, and with the help of Stefan Podell's powerful orchestration, we put together what is now 'OPEN.'

It has 4 movements all intertwined, and seems to have a life of its own. For those who love this kind of music, I feel so happy to present it as one of many I hope to create over the coming years. My love 'Janee' has helped in production with her unique musical observations and her angel voice. I am so happy and thankful... Many Blessings." Jon Anderson - October 2011

In other news, Jon Anderson is currently on tour in the US and Canada with fellow former YES member Rick Wakeman. The legendary duo performed a series of successful concerts in the UK in 2010 in support of their critically acclaimed CD release 'The Living Tree', and have now brought their highly anticipated show to America! In December 2011 Jon will be performing select solo concerts in South America. Go to www.jonanderson.com/tour.html for more information. Lastly, Jon Anderson's latest CD release 'Survival & Other Stories' has been garnering rave reviews worldwide by critics and fans alike. You can purchase the CD at: www.amazon.com/Survival-Other-Stories-Jon-Anderson/dp/B004XIQHWU/ref=sr_1_1?ie=UTF8&qid=1308606761&sr=1-1