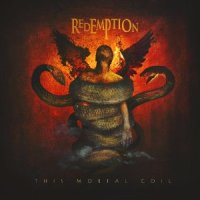 Redemption is a hard hitting band musically speaking and will soon be releasing their new album entitled, This Mortal Coil. They even teamed up with producer Neil Kernon who has worked with Kansas and Nevermore to name a few.

The album starts off with a punch on the track, “Path of the Whirlwind.” The first minute and half is solely instrumental and then some clear cut vocals start up. Throughout the song’s entire duration, the drums really stand out above everything else. They are fierce, loud, and powerful in a way that is quite captivating. In fact, for most of the album the drums stand out.

The guitars are not left out though, not at all. “Dreams of the Pit,” sounds like it was specifically written for the guitars. The sound is wonderfully tight with a rapid tempo that increases drastically at times. The tightness of the guitar also picks up as well. Midway through the song, which is about nine minutes in duration in total, the keyboards start to shine through over the other instruments for a short, slowed down, but melodically interesting period of time adding something extra to the track.

The keyboard is also prominent on, “Focus.” Of course, the song starts with the dead on pounding drums and fast guitars at varying speeds but eventually the keyboard is brought into the forefront of the sound. It is played in a very quick, somewhat high pitched style that accompanies all the other instruments and the remarkable vocals quite well.

This Mortal Coil is the latest disc to come from Redemption and I am not sure how they are going to top this one. The drums are loud and fast, the guitars are tight, and the keyboard is melodically perfect. The music featured on this album is constantly kept at highly skilled levels in an almost unbelievable fashion. What more could listeners want?

Key Tracks – Path Of The Whirlwind, Dreams Of The Pit. Focus