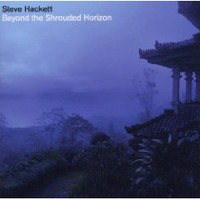 Steve Hackett showcases his skills as a guitar player side by side with his skills as a songwriter on his latest album Beyond the Shrouded Horizon, a hefty release which takes its time unfolding. It is an album that can be fully enjoyed while sitting down. The former Genesis guitarist and ever prolific solo artist seems determined to prove with his body of work that Rock is not only timeless, but ageless as well. It’s got the Hackett stamp all over it, and should appeal to old fans and newcomers alike.

“Loch Lomond,” the albums lead off track, transitions seamlessly into “The Phoenix Flown”. Similarly does “Wanderlust” bleed into “Til These Eyes.” Most of Beyond the Shrouded Horizon is presented in this way, a vague delineation between tracks presented in pairs. But on the occasions when there is a pause between songs it too seems deliberate and is welcomed for what it is: a brief moment for the listener to reflect on what they just heard, like resurfacing for a breath of air before diving back beneath the water’s surface. I always appreciate when the tracks seem deliberately arranged on an album, as they do in the case of BtSH. There is an obvious ebb and flow to the tide of songs, which makes for a very dynamic hour of listening. Neatly spaced instrumental tracks give the bits with lyrics a little more import.

“Til These Eyes” is an outstanding number - short but sweet, hiding subtle hints of Simon and Garfunkel in its minimal instrumentation and simple harmonies. “A Place Called Freedom” is a little drawn out and a little too feel-good, but that’s an aesthetic complaint, not a technical criticism. “Looking for Fantasy” is almost like a lullaby, featuring soft nylon string acoustic guitar, lightly brushed high-hats and ethereal harmonies executed with no small amount of assistance from the synth. It sounds soft and sweet but the lyrics lend to it a melancholy quality that does not quite agree with the light, breezy progression and accompanying melody. “Looking for Fantasy” is about a woman who is doing exactly that, harboring delusions and living in the past, looking for an escape for reality – into fantasy. Rich with pathos, this one is. Hot on its heels is “Summer’s Breath,” a short acoustic instrumental number, which just about finishes lulling you into a thoughtful dream…when “Catwalk” explodes onto the scene and snaps you wide awake again. Featuring Chris Squire (of Yes) on bass, “Catwalk” is, in the main, a dirty down-tempo rock song steeped in the blues tradition; the kind of song that practically requires you to play it on a jukebox and then strut back to the bar with an intense (yet also distant) look about yourself. This is right about where BtSH takes a hard left turn into the home-stretch.

The final track, “Turn This Island Earth,” is an epic and intricate composition, hands down the “proggiest” (or most prog-like): heavily riff-laden with quick rhythm changes, sparse vocals and sweeping synth melodies and textures. At about the seven minute mark the “A” theme dies out and is replaced by the “B” theme, a darker concept that sounds like what’d be playing if you were being led (and then chased) through a darkened forest in a Tim Burton film.

If you’ve liked any of Hackett’s past work, you’ll find something on Beyond the Shrouded Horizon that you can get behind as well. There’s no steep point of entry into these songs, but that doesn’t mean they lack depth. The production value is high and nothing feels forced, which is less of a relief as it is surprising that after 40+ years of releasing records the man still has it in him to reach for that one more, as if he’s chasing a sound he hasn’t yet found, or even better still – does it out of genuine love of his craft.