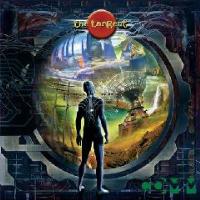 The Tangent have a devoted following and have garnered themselves considerable praise in the prog community. A Place on the Shelf and Down and Out in Paris and London have both been called “masterpieces” on the internet (for what that’s worth). Their latest release, COMM, deals with exactly that question: what is that worth? The internet in general, but more specifically: how much is anything really worth when so much these days can be obtained so quickly and at such little cost, if any.  Being a newcomer to Camp Tangent, I can neither accede nor refute the claims that this is the bands best album. If that’s the general consensus among fans, then maybe there’s something I’m missing.

We start off with a steep hill to climb, as the album opens with the twenty minute opus, “The Wiki Man.” First and foremost I’d like to declare that that pun cannot and will not stand. I’m sure the members of Iron Maiden would turn over in their graves if they heard about this (and if they were dead yet). It establishes the underlying theme of the album, which is the effect the proliferation of technology has had on our societies, on our philosophies, and how in bringing us together is has also served to alienate us from one another and indeed, even ourselves. Pretty well worn ground they’re treading on, but it’s worth a shot.

The opening sample, which sounds like a dial up modem connecting to AOL 3.0, corresponds with lyrical insights about the internet that too sound like they were written in 1996, the only thing anchoring it in the modern era being lines like “…or a tap on the screen.” (touchscreen technology not being as prevalent 15 years ago as it is today).  “The Wiki Man” sounds like a conversation you’d have with your grandfather about the internet, and it’s not clear whether he likes it or hates it; whether it frightens or saddens or amazes him or what. Apart from the anachronistic quality inherent in the lyrics, it is rife with clever rhymes and conflated clichés (and in this instance, ‘clever’ is not used flatteringly).

The second track, “The Mind’s Eye,” is pretty much more of the same. Some of the more enjoyable subtleties of Tillson’s songwriting skills begin to emerge on “Shoot Them Down,” the first track on the album that sounds like they took one idea and ran with it, developing it instead of throwing bits and pieces of multiple themes and ideas together into a musical blender and serving us the resulting slurry. “Tech Support Guy” sounds like a Jethro Tull cover band got together to compose an original tune, a salute to the unsung heroes of Rock and Roll in the digital age (it appears), but the only singer available at the time was the guy who was dropped in the first round of the Ian Anderson sound-alike contest. “Titanic Calls Carpathia” is COMMs second supporting pillar, a sixteen and a half minute prog jam with solos and jams abound. Pleasantly surprised by this one. It felt appropriate and organic and unlike “The Wiki Man” didn’t feel like ten ounces of jam in a five ounce jar. The guitar solo that begins just before the thirteenth minute is particularly tasty, and it builds to a finale that comes right on time. Though the same trite ideas are expressed as in “The Wiki Man,” musically it melds better. “Titanic Calls Carpathia” feels like it could have come instead of “Wiki Man,” not in addition to. On COMM, it feels like a redundant recapitulation (which itself may be a redundancy, I can’t tell).

The Achilles heel of this album is over-production. There are too many elements present in each song. I’m hardly opposed to a change in mood or tempo, and I’m certainly not against unusual or unconventional instrumentation, but it doesn’t seem to serve a purpose on COMM. It’s sound for sound’s sake. Maybe it’s the inevitable result of a band with so many active participants: the composition will sound cluttered, too busy, or forced. Though each member may be technically proficient and talented (I’m not so cruel as to deny them that), it just appears on this album to be too many cooks spoiling the broth. It’s not played poorly, but it’s chaotic.*
There’s a nicer way to say that: Musically, it’s alright. I can deal with COMM being all over the map, stylistically speaking. As a sonic experiment, it’s interesting at best, a curiosity at worst. It’s tight, at least. Everything seems deliberate, whether or not it’s appealing. What makes it hard to return to this album are the lyrics (the vocals too, but mostly the lyrics).

(*At the risk of giving them too much credit, it may be possible that this was a conscious effort, this muddling of styles, ideas, &c. COMM may have been intentionally modeled after its subject: the internet itself. By just being a jumble of content, seemingly aligned according to its own existence, maybe COMM is making a dual statement not only by what is said but also by how. +2 stars if this is the case.)