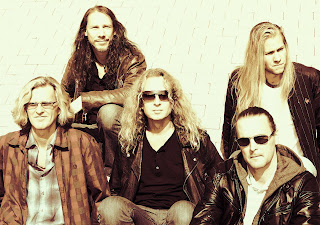 Sweden - Progressive rock aficionados across the globe are clamoring for the new release by the Swedish quintet of progressive rock royalty Agents of Mercy. The celebrated ensemble's third release, 'The Black Forest', is a concept album; one 56-minute mega-tune of prog bliss edited into separate slices. Now you've heard the term 'concept' a million times, but the new album by Agents of Mercy takes the idiom to a higher level, all the while pushing the prog envelope to its extremes.

'The Black Forest' is a surreal journey – a mysteriously glowing metaphor for a trip through dark, disturbing, scary times; a lifelong uncertain journey encompassed by greed, lust, hunger for power and money, eternal life, and mind control. And guess what – we're the prey!!! This is Agents of Mercy's first concept album with a longer song format. Tales of dark future times, seen through the eyes of a weary traveler in wiggly warped woods of our imaginary journey some 300 years ago. Elzbeth Bathory meets unholy rapists and flesheaters in a quiet town and deformed freaks of a traveling sinister circus haunt you at bedtime. Did you lock the door? Is the monster your neighbor?

“The music this time is a more rock oriented path we've taken,” says guitarist, band leader and Flower Kings legend Roine Stolt, “for good reasons – we are a rock 'n' roll band at the core, but we sprinkle bits of symphonic, world, jazz, medieval and folk. Guitars and drums have moved forward in the soundscapes, but the gnarly Moogs and mellotrons are still present, this time a bit more haunting and angular. The songs are longer and more elaborate, but sometimes with an iron fist of raw power riffage that resembles Black Sabbath, Deep Purple, Led Zeppelin or early King Crimson rather than YES or Genesis. Don't fret – in this 56-minute journey there is plenty of symphonic bombardment too. In fact, we think there is even more than on previous albums!”

“We laid down the basic tracks on 24-track analog tape in a lovely studio in the middle of Sweden's countryside in April,” says Roine, “a place called Varnhem (very dark age). The studio is a top notch, super hi tech, newly built million dollar sanctuary – to our ears it sounds bigger than pure digital; modern but yet fat analog.”

And what does the immediate future hold for the Agents of Mercy? “I would love to perform 'The Black Forest' as one long piece of music, but we're awaiting the reaction and have not yet decided since we play plenty of older material,” explains Roine. “We've just finished a short promotional tour of shows for the release in Europe, and will plan for a longer tour the beginning of next year, In the meanwhile we are playing one-off gigs and festivals. We are also working on a few video things for the album and eventually a vinyl version of it.”

In closing Roine has a message for Agents of Mercy fans around the world: “My message is pretty much what it has been for decades: 'Love is the only answer' – with the power of love and compassion almost anything is possible. In the absence of love, the world and our souls are in decay. This new album is indeed called 'The Black Forest', but it does not for a minute salute the darkness, it just tries to point out that it exists here and now and that we can turn to the light at any moment – such is the power of will!”

Agents of Mercy – The Black Forest can be obtained at: www.flowerkings.se ;