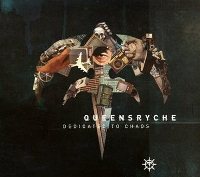 I am avid follower of Queensryche and have been for years now. I bought all the remasters and have seen them in concert twice. There was never nothing not to like for these ears. They played progressive-metal with great storylines. The band has additional talent on this release however the core members are now Eddie Jackson (Bass), Scott Rockenfield (Drums, Keyboards), Geoff Tate (Saxophone, Vocals) and Michael Wilton (Guitar).

So after all these years of knowing what to expect, along comes Dedicated To Chaos and find myself reading nothing but crap about this album. Could it really be that bad? I finally had enough and decided to pick up the special edition of the recording that includes 4 bonus tracks. I know this is far from being metal or progressive music and I knew what was coming when I got this but I had to hear it all for myself to decide how I felt about it and not go with the negative flow that was out there all over the internet. I am glad I decided to give this a shot.

Upon first listen of Dedicated To Chaos I was surprised to hear how they transformed into a rock band, albeit on the heavy side at times. I have to hand it to this band, they have written their own story and continue to try different things at the risk of losing fans and the resulting firestorm that comes after that. Unfortunately there was plenty of fallout after this album came out. I have a feeling they will survive it all and move on to the next project without batting an eyelash. That is why I admire this band so much.

The first 7 tracks of this album I really enjoyed. They perform with typical Queensryche preciseness featuring rocking well produced tracks. What happens after that is where I get a bit lost at times.  “Hard Times” and “Broken” started making me feel like the prevailing consensus out there. The fact that these guys are such fantastic musicians has a way of sucking you back into their world regardless of where they are living at the moment, at least that is the way it worked for this fan. Track 10 “Drive” brought me back and “I Believe” was good but again I reverted back to some disappointment with “Luvin’ U,” which provides some great music but offers sappy lyrics. There are few more dingers like that coming at you as the album wears on.

I must say Geoff Tate has still got some strong pipes and his versatility is evident throughout this eclectic group of compositions. From a musical standpoint that is where you find yourself amazed at what they produce. It’s too bad some of the lyrics are so bad. One of the bonus tracks “The Lie,” is the closest they come to being the band we all know but it pretty much ends there. For providing 4 bonus tracks I thought they were decent additions to the mix, all things considered.

If you are diehard metal fan Dedicated To Chaos will just piss you off or if you appreciate excellent musicianship than you can find some highpoints on this album, then again if you are looking for deep lyrics, you will not find it here. You will find many things on this album but not the Queensryche you have come to know and love. Many people will walk away from this asking “Will the real Queensryche please stand up?”

They should have named this album Dedicated To Change. There was not enough of the familiar Queensryche here to have me reaching for this to give it another spin. This completes my collection so far and that is about it. Regardless of my feelings on the entire presentation, they get an A for musicianship and C for lyrics.

The Ryche need to make a strong comeback on their next outing and a return to form for any hope of gaining the audience they lost on this one. I still have faith and I will be ready for the next one and give them the benefit of the doubt because they deserve it.