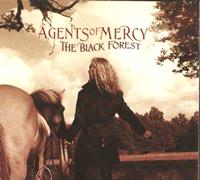 With Roine Stolt’s brainchild Agents of Mercy going back in the studio within a very short time after their second release Dramarama, I knew that he had those creative juices flowing and was itching to get back to work. This comes as no surprise as the man has been on a creative curve going upwards for over two decades now.

As with his several other projects, Roine stretches out more and comes up with a masterpiece of progressive rock that always improves upon the last recording.

Black Forest is the band’s first concept album and actually a 56 minute track that they cut up into more bite sized digestible pieces. So where does one start with a prog rock magnum opus such as this? Is it going to be pompous overkill or a beautiful painting on a musical palette? What I heard was 8 tracks of unrestrained brilliance from beginning to end on this release. I expect each release to be different and so far all three have with this being the most captivating of them all. I found it interesting how CD Baby listed this album as 70s rock with influences from Led Zeppelin, Genesis and Procol Harum. The influences are clear with the music Roine makes however I would not call this 70s rock, there are bits and pieces that would qualify as such on any album but make no mistake this is progressive rock through and through.

The lead off track “Black Forest” takes you into another time and place some 300 years ago through the eyes of a weary traveler and as the album progresses so does the music and the story. “A Quiet Little Town” is an interesting thought provoking track that will form a perception not only through the storyteller’s eyes but through you, the listener. It is beauty and cynicism that leaves you hanging at the end of a rope waiting for an escape route then around the corner comes more darkness with “Black Sunday.” While this is all going on as you are absorbing all the incredible soundscapes created by this band of musical supermen, you hear Roine’s guitar wailing away, cutting like a knife or in the same instance giving a subtle nod for the next instrument to come in and lead the way. Although Roine is a musical genius he plays as part of a team and each member of the band gets their moments in the sun as matter of course.

“Freak of Life” is the most powerful rocking track. It sounds like it could be a step back to medieval times but the difference is there is a stage where Roine and the band are playing this song right outside the renaissance fair, luring you in to see the show. You could also imagine this being played outside of a modern day circus big top. Any way you look at it, it’s a freak show. Think of a deranged Jethro Tull minus Ian’s flute and a little more sophisticated and heavy you may get a grasp of what this music can sound like on this powerhouse track.

But don’t get the impression this is anything like Jethro Tull or any other band you have heard. This is Agents of Mercy, a project that started off with two guys throwing a few songs together that became a band that rivals the Flower Kings in their most fertile period. I think it was best to put the Flower Kings to bed for a while and start something new and challenging, and that is what Mr. Stolt has done, again with great success.

Black Forest can be a fantasy, a tale from the dark ages or a twisted look upon on the cold realities of life regardless of what century you lived in. It all depends on what eyes you are looking through but in the end what you get is one of the finest progressive rock albums of 2011.