Knight Area’s fourth studio album, Nine Paths, is an affectionate throw back to the best of early 70s prog rock. That is not to say that the album feels dated. The smooth production and flawless mixing give the album a decidedly contemporary sound that is to be experienced as much as listened to. If Dream Theater, early Rush and pre-90125 Yes had a baby, it would sound a lot like Knight Area. 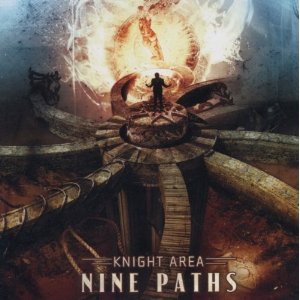 The album opens in true prog rock style with a 10 minute piece, “Ever Since You Killed Me,” which sets the pace and prepares the listener for the music to come. The lyrical tone of the album is established with the requisite emotional fatalism that fans of this genre will readily recognize:

Ever since you killed me
My spirit will not sleep
The way that you behaved
Summoned me back from the grave
Following in your footsteps, where you go
I'll go there too...

The theme of emotional desolation continues on the second track “Summerland”. Lead singer Mark Smit plaintively asks, “How can I bear this being alone; the hollow caves are made of stone.” While this sentiment harkens back to a 90s and early 21st century songscape that celebrates pain and anguish, the song ends on a note of qualified optimism as the narrator dreams about a world that could be - unbound to wander around “far across the globe through a god-sent no man's land on the wings of hope.”

The most conventional song on the album is the duet “Please Come Home.”  While Smit and co-writer Charlotte Wessels don’t break any new lyrical ground as they lament a lost relationship, their performances are emotionally evocative as they contemplate the road not taken:

Now it's many years ago
Have you found what you're looking for?
Is it all you expected it to be
A life without me?

The expansive musical score written primarily by keyboard player Gerben Klazinga often evokes the drama of Jim Steinman while tunes such as “Summerland” and “The River” recall the intricate precision of Yes alumni Steve Howe, Rick Wakeman, and Trevor Rabin. Guitarist Mark Vermeule’s Satrianiesque runs, while very busy, never feel tacked on or overly showy. In fact, the musical interludes all seem to be done with a sense purpose.

While the musicianship of every member of the band is evident, Pieter van Hoorn’s crunching drum parts particularly stand out. His double bass work, while prominent throughout, is never overdone so it never loses its impact.

Very few contemporary bands allow the keys to occupy such a prominent placement within their songs and keyboard player Gerben Klazinga makes the most of his opportunities. Gijs Koopman’s bass and the bass pedals  of Moog Taurus polish off the band’s early 70s feel while avoiding the obvious temptation to channel Geddy Lee.

While each player has moments of virtuosity, every Knight Area song feels like a painting with each instrument a different color on a musical pallet, used in the service of the whole rather than as showcases for the individual players.

Those listeners who are already aficionados of the symphonic prog rock that is Knight Area will not be disappointed, while those adventurous souls who are dipping their toes into these intricate waters for the first time may find themselves turned on to a musical style of great depth and artistry.


Key Tracks: Ever Since You Killed Me, Summerland, The River, Please Come Home