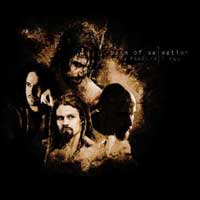 Pain of Salvation has a long and impressive history as a band.  Started by Daniel Gildenlöw in 1984 under the name Reality, the project got its name that it is known by today in 1991.  They have gone through some line-up changes since their early days with the current one being Daniel Gildenlöw (vocals, guitar), Fredrik Hermansson (keyboards, synthesizers), Leo Margarit (drums), and Johan Hallgren (guitar), who will be leaving the band at the end of this year.  As a progressive band, they have never been afraid to push the boundaries of their music.  Over the years, their concept albums have taken on such issues as childhood, war, human existence, and the nature of God.  Pain of Salvation continues their progression with Road Salt Two.

The aptly named “Road Salt Theme” opens the album.  It has the atmospheric quality of a movie theme and the displays the best thing about Pain of Salvation as a band, because you never can be quite sure of the type of sound you are going to receive with each release.  “Softly She Cries” is unusual and brilliant at the same time with its mindful lyrical content.  You can feel the emotion from the opening chords. “Conditioned” is my least favorite song on the album.  It sounds too much like an American rock song for my tastes and has not grown on me through multiple listens.  The acoustic “Healing Now” has an impressive instrumental part that is very cathartic in nature.

“To The Shoreline” has the interesting quality of having a sound reminiscent of songs off their earlier albums with the mix of the new Road Salt sound.  “1979” is a song about the past and childhood and a longing for bygone days that is done in a way that is not overly sentimental or melodramatic with lyrics that might just be autobiographical.  “Mortar Grind” is a song that I enjoy very much.  Its extended opening has a haunting quality to it that is carried on in the background music.

“Through the Distance” is a song that I especially like because of how beautiful Dan’s voice sounds on it, even more so than the rest of the album since his voice never fails to amaze.  “The Physics of Gridlock” is another good song with introspective lyrics to match in true Pain of Salvation style.  “End Credits” brings this production to and end with its sense of finality as it leads the listener out in serenity.

Road Salt Two is another solid addition to the Pain of Salvation growing and highly impressive discography. I think the new sound will most likely not win the hearts of those who love the earlier works, but it I still think it is worth the listen.  Pain of Salvation rarely disappoints and it will be interesting to say the least where they will take their sound in their album as they continue to progress their music.

Key Tracks: Softly She Cries, Healing Now, To The Shoreline, 1979, Through the Distance, The Physics of Gridlock