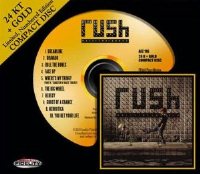 Roll The Bones (1991) was a return to fine progressive rock form for Rush after releasing some rather unfavorably styled recordings that the faithful found disappointing, although they enjoyed success in spite of that.  Guitar man Alex Lifeson found his groove as he did on the previous release Presto, or should I say Geddy Lee (bass, vocals, synths) and Neal Peart (drums) came to an agreement with their six-string gun slinger that it was best to stay with what made them legends in the first place.

Audio Fidelity selected another breakthrough release to reissue in their 24 Karat Gold format. Yes, this is but one of so many fantastic offerings from the Canadian power trio but a great place for a reissue label to start.

“Dreamline” is an awesome way to open the curtains for this album. What you get are 10 solid tracks including the legendary “Ghost of a Chance.”  This is a very dark album lyrically for Rush and as the cover indicates the bottom line is about death but a shrug of the shoulders in the same the breath with the kid kicking the skull out of his way like it was a soccer ball. You have to love the attitude of the imagery and this is where Rush grab back what was theirs. The trio is in superb form in every way on this album and there is no denying that. “Roll the Bones” probably came as a shock as the middle of the track breaks into a rap. Thank god that was short lived and did not set precedence for things going forward otherwise the road they traveled would have been a rough ride. History would write a different book for Rush and they would release many more great albums.

The sound is prolific and matches up with the impact it had for the band at the time. There are elements made more apparent to your ear with this format. Sometimes the changes are subtle things you never noticed before and at other moments revelatory. In any case, there are consistent improvements in sound when Audio Fidelity takes a recording through their own process and then releases it as a gold disc. What I found more sharper are the guitar parts and although Pearts’ drumming is always apparent it sounds placed perfectly in regards to the VU and it does not overtake any other instrument. It can easily happen that way because the man sounds like a band by himself. Paying attention to that power and forcefulness and appreciating all the other aspects that make this album what it is was just as important to the label and I totally heard that throughout this release.

In 2011 Rush is still huge and all their releases are looked upon as iconic and this one is no exception. I appreciated the original artwork and the CD booklet including all the lyrics as well.  This is a nice package and the ultimate Rush fans experience to be sure. This is not to be missed and I don’t care how many versions of Roll The Bones you have, this is one you have to hear because it is as close to perfection as it gets.

Key Tracks: Dreamline, Ghost of a Chance,  Roll the Bones