Review: Evergrey-A Decade And A Half 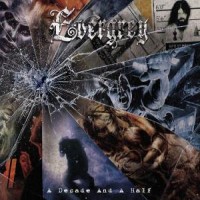 When I think of Sweden’s musical output, I think of Metal. When I think of Gothernburg, Sweden, I think of Progressive and Death Metal. That city has a firm hold on that subgenre’s market share and can prove it with the number of metal bands it’s produced.

Evergrey is one of those bands. Comprised of Frontman/Vocalist/Guitarist Tom Englund, guitarist Marcus Jidell, keyboard Rikard Zander, bassist Johan Niemann, and drummer Hannes Van Dahl, they bring forth Progressive Metal that is to be reckoned with.

Having been in existence for fifteen years, the band has an impressive musical output to their name–they released their eighth album earlier this year. Releasing all that material eventually allows one to step back and see which songs are their best, which is what A Decade And A Half contains.

This being Progressive Metal, one can expect to hear lots of aggression as well as emotion, and A Decade And A Half does not disappoint in either area. The bands’ ability to be both crushing and depressing simultaneously is nothing short of spectacular, though they definitely have the ability to be one or the other at their will. “Frozen” is one of the best examples of the two personalities, beginning with a fantastic opening riff that abruptly ends, where Tom Englund’s haunting voice takes center stage. This switch reoccurs throughout the song, but it happens appropriately and not too frequently.

“When The Walls Go Down,” is their most emotional song. It begins with the keyboard and a spoken dialogue depicting a man wrestling with his faith. It’s layered with strings in a very tasteful and appropriate way. It takes a few minutes before the drums enter and picks up the pace and intensity, but you won’t have been bored waiting for that.

But if I could summarize Evergrey in one song, it would be “Blinded”. A dual guitar riff attacks right from the start and the band is moving at one hundred miles per hour. Then the power halts, and Rikard Zander enters with a mystical keyboard synth that seems anything but out of place.
The chorus epitomizes what Evergrey is all about; it manages to be huge and heavy as well as very melodic, with all members contributing backup vocals.

A few live tracks and unreleased/unplugged versions are a nice addition. This compilation even features a live cover in which a guest vocalist appears (“For Every Tear That Falls”).  But this collection isn’t perfect. One problem is the monotony, as each song bears a strong resemblance to the one next to it. And each song is filled with so much emotion that one can be overwhelmed at times. But Evergrey have made a fifteen-year career out of it, so they must be doing something right, and no one can fault them for that. This career retrospective is a good collection of some of their best–received songs, and it’s worth a listen.

Key Tracks: Frozen, When The Walls Go Down, Blinded

Email ThisBlogThis!Share to TwitterShare to FacebookShare to Pinterest
Labels: Evergrey-A Decade And A Half, Progressive Metal, Progressive Roc