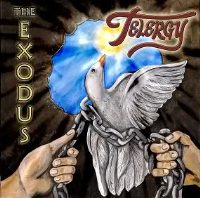 Telergy is the first foray into the magical, mystical land of progressive rock for composer and multi-instrumentalist Robert McClung. Leaving behind the realm of pop music which had sustained him for nearly twenty years, McClung has assembled a talented cast of musicians and voice actors and artists to assist him in executing The Exodus, what some are already calling a masterpiece of modern prog rock. While it may be too early to be throwing accolades like that around, one thing is for certain: you’ve likely not heard an album like this recently, and you likely won’t again.

Concept albums are no rarity among the ranks of prog artists, but this one’s a little different. There are no lyrics, instead there’s a script; in place of vocals there are voice actors. It’s kind of like The Rugrats holiday special from like twenty years ago, the one where the grandfather is trying to tell the kids the story of Pharaoh in Egypt and the first Hanukkah and all that, only instead of a grandpa it’s a grandma, and instead of short cartoons featuring babies, there’s badass progressive rock interludes that are even more effective at conveying sentiment and setting than waddling toddlers muddling through interpretations of religious texts, if you can imagine that.

The albums opening scene is that of a grandmother and grandchild cleaning out an attic together. They come upon a record player (what I imagine to be an antique Victrolla of some variety or another) and the elder matron plays for the young grandson one of her favorites, an old recording of “Go Down Moses.” About a minute of “Go Down Moses” plays complete with the crackle of vintage wax before the seamless introduction of some soft synth textures, and the ‘music’ you might be expecting finally begins. If you make it past the first two minutes, you’ll begin to see what there is to like about this album. It’s epic and cinematic, emotional and dynamic, and unlike many concept albums which remain obtuse and difficult to decipher, The Exodus explains itself so simply a child could understand it. A child has to understand it, in fact, since that’s who it is addressed to. But don’t let that fool you. Like Disney’s Fantasia, the potential for darkness can be easily underestimated.

The narrative commences with the transition from “Into the Past” to “Enslavement,” (track one to track two). Grandma begins telling her grandson the story of The Exodus, as though she had experienced it firsthand. You can practically hear the expression on her face as she says “It was awful,” which by itself isn’t so hard to imagine; empathizing with ones ancestors is certainly not unheard of. But hearing her laying claims like the Pharaoh “worked us all something fierce…and if we didn’t work, we got a good lashing. I mean a good lashing,” makes me think that Grandma should be spending a little less time dusting off records and a little more time taking her brain medication.

Following this sentiment is “Enslavement,” a seven minute plus instrumental overlaid with whips, chains, and the wails of the oppressed, which paints the scene in my mind of Grandma, up there in the dim, dusty attic with her increasingly baffled grandson watching her slip into a pseudo-psychedelic Viet Nam-like flashback to her time as an Egyptian slave. Her conviction is both troublesome and extremely comical. This establishes a pattern which continues for most of the album, and I crack up every time at the thought of her just sort of stroking-out up there in front of poor little Billy, who has no idea why his Gam Gam seems to be acting so funny.

The non-musical interludes, the ‘skits’ (for lack of a better word for them) are insufferable, but mostly because I’m just not that interested in hearing people talk when my aim is to be listening to music, especially when it’s a story I’ve heard more times than years I’ve been alive. It’s counterintuitive and it puts me off. The latter half of the album is much more enjoyable, as the skits appear fewer and father between (there’s a good twenty-two minutes there, from “Is There Anybody Out There” right through to “Canaan,” four full tracks with minimal verbal interruption. It’s the best third of the album.)

To give credit where it’s due however, I’ve never heard anything done like this before, The Exodus is wholly unique, so huge props for going out on a limb and trying something that hasn’t already been proven to work about a billion times already. I respect anyone trying something old in a new way. Skits aside, the music is on point. McClung has shown that as a composer and a musician he is no slouch (I mean, just listen to “Commandments” if any doubt about that remains) so I am anxious to see what projects Telergy may tackle in the future.