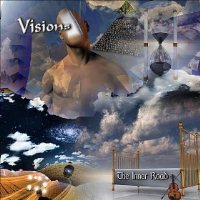 When I received another album entitled Visions to review, at first I thought I was seeing things. Earlier in 2011, Haken released an album with the same name, so once I realized that it was not some type of error, I was excited to see how different approaches (with one large aesthetic similarity: the title) may compare. Turns out, they don’t really. The inherent similarities of two albums called Visions may have been an oversight on my part. I’ll let that go.

Despite being an instrumental album (for the most part, the way a prog album ought to be), there are sparse vocals peppered throughout the album. “Day of the Sun” for example, includes what sounds like samples of Stephen Hawking talking about the universe. Birdsong, barking dogs, babies crying, distant laughter and some harmonious vibrato ‘Ooh’s and ‘Ahh’s can be heard as well across various tracks (mostly on “Heaven”). Though never featured the way that lyrics typically are, their inclusion does render the songs more dynamic (though I would hesitate to say that they are an integral part of the score).

On the whole, Visions is a solid symphonic prog rock album, heavy on the synth. Formed as a spin-off side project of British band Coalition, The Inner Road was established as a vehicle for the collaboration between Steve Gresswell (comp./keys/drums/bass) and Phil Braithwaite (comp./guitars) who felt that some of the material they were writing together would not suit Coalition. To me this sounds like they just wanted to write some new material without including Coalition’s third and final member, vocalist Paul Bulger, on the new songs. But having heard Coalition, there are differences between the two bands that render them distinct from one another, the way apple juice is different from apple cider. (If you’re not sure which is which, Coalition = Juice and TIR = Cider.)

Coalition’s songs seem to have more structure and direction to them, distinct ‘parts’ as you may call them (This part here’s the intro, then there’s an A part, followed maybe by a B part, back to A, throw a bridge in there from B to C, &c.), constructed in a way that is congruous to most commercially accessible rock, while The Inner Road seem to take, well, an inside approach, creating more meandering and pensive music where mood and atmosphere take precedence over action and objects. To put it another way: Coalition plays progressive rock with an emphasis on the rock, while The Inner Road plays progressive rock with an emphasis on the progressive. (Interestingly enough, both Coalition and The Inner Road are practically side by side on ReverbNation’s  ‘Rock Charts’ for Reading, UK. Coalition remains 4 places higher than The Inner road, however (69 and 74 respectively, as of 12/28/11).) Continuing with the cider/juice metaphor, it stands to reason the if you like one you’ll like the other, but drinkers (and listeners) may have a clear preference for one over another.

My money’s on Visions.