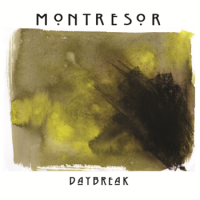 Montresor say their influences include Alcest, King Crimson, and Rush. Once you start listening to it, it becomes very easy to hear those influences. There’s plenty of spacey guitar work inspired by Alcest, complex time signatures and long jam sessions reminiscent of Prog greats Rush and King Crimson. It’s a very interesting combination that sounds, on paper, difficult to take in, but I think it works.

“Daybreak,” the opener and title track, is a short little intro that musically evokes its name. It’s a beautiful soundscape of a track. Between this track and the beginning of “Helios/Flight To the Moon,” it’s very easy to hear all their influences being used at the same time. “Medusa” is very progressive, but doesn’t speed up. The guitars’ distortion makes things a bit tougher, but not by much–that is, until about four and a half minutes in, when the groove and tempo are kicked up a notch and get to one step below progressive metal. “Longing” sounds like Daybreak Part 2, and thus is very pretty. “…To The Cosmos” kicks off at a fast rock tempo but retains the echo and delay from the guitars; it’s almost like two halves of the band’s brain are speaking at once.

When the band gets heavy, one can clearly feel the King Crimson presence. When the groove gets weird, Rush is what comes to mind. And Alcest clearly brings the delay and echo to the music. This sounds like what would happen if all three bands got together and wrote a collaborative album, all members’ songwriting inputs equal.

Daybreak is a musical liberation for Montresor. Music like this doesn’t get tons of fans the way pop rock does. And this also is an instrumental album, which doesn’t lend the band any favors.  But that’s not the point–this is an album the band wrote for themselves, something that was gratifying. I like albums like this very much, and to me this one’s a keeper. Is it the greatest thing I’ve ever heard? Far from it. But has it done its job of getting me interested in this band enough to want more music from them? Absolutely.