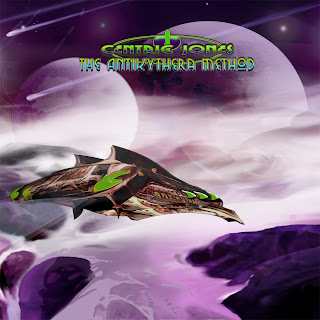 Loveland, CO - One of the most highly anticipated new CD releases in 2012 by prog duo Centric Jones has the music community buzzing with excitement. Slated for release on March 6th by Prog Rock Records, 'The Antikythera' is Centric Jones's sophomoric release and promises to take the listener on a sonic adventure. With influences like Rush, Porcupine Tree, Dream Theater, UK, YES and King Crimson, Centric Jones has taken progressive rock to a whole new level!

Centric Jones is Chris Fournier and Tobe London, augmented by an eclectic set of revolving musical guests. Chris plays bass, guitars, keyboards and electronic percussion, and Tobe plays drums, acoustic/electronic percussion and keyboards. They met in 2007 and discovered a shared goal: to create songs that broke through musical boundaries without sacrificing feel and an emotional connection to the audience. Fournier and London had the ability to excel at doing this, which in 2009 resulted with the duo's critically acclaimed debut CD 'Foreign Tea'. Centric Jones continued to build up the emotional appeal and complexity of their music both rhythmically and melodically following that first album, culminating in the up-coming release of their new CD 'The Antikythera' on Prog Rock Records. With both musicians being involved in various bands since the late 1970s, Centric Jones is able to stand apart from much of the musical pack today by merging their mature musical senses with the drive to create ever-more-expansive sonic imagery.

When asked if there was a concept behind the new Centric Jones album Tobe had this to say: “I've always had a fascination with mechanical devices and gizmos. Of particular interest to me is the Antikythera mechanism – the ancient Greek mechanical computer designed to calculate astronomical positions. I'd like to go on and on about the thing, given the fact that it predates anything like it by about a thousand years. The most fascinating aspect of it for me would be its inherent rhythm. I picture all those handmade gears turning and churning in an amazing visual if not audible display of polyrhythmic wonder. Centric Jones loves to apply this as much as we can to our music. We call it The Antikythera Method.”

In support of their new CD release, Chris and Tobe are currently putting together a live show consisting of some of their favorite album songs combined with improvisations and some theatrics. The duo plan on performing locally on the Front Range of Northern Colorado in addition to some of the progressive rock festivals going on in the US and elsewhere during the summer of 2012. They are also implementing a new recording setup in Tobe's studio in order to more directly compose and trade tracks together – new albums of increasing ambition are on the horizon for sure!

Finally, Chris and Tobe have this to impart to their listening audience: “We would like to sincerely thank anyone who purchases our album and gives us a chance to share our music with them – it is truly exciting and enjoyable to compose and perform, it's the kind of thing we've both dreamed of since high school! As we continue to perform live, we are hoping to add more musicians to our collective to bring you an ever-increasing wall of sound. We hope to see you at a festival during he summer of 2012.”

'The Antikythera Method' is the first release from Centric Jones on Prog Rock Records and is available for immediate ordering at a $2 discount till early-February 2012 and will be shipped in mid-February. It will be available at retail and digital outlets March 6, 2012. Audio samples, information and ordering can be found at www.therecordlabel.net/progressive-rock/centric-jones/the-antikythera-method