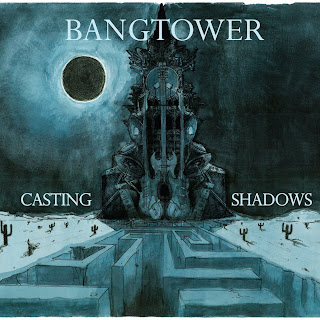 Los Angeles, CA – Progressive rock/fusion ensemble BangTower, in association with Pig Light Show and Declassified Records, are releasing several new music video's over the next four weeks in preparation for the forthcoming 2012 BangTower tour, currently being scheduled by Backstreet Booking of Cincinnati, OH. In addition to celebrated bassist Percy Jones, who is also known for his work with Brand X a band he formed along with Genesis legend Phil Collins, BangTower also features Grammy Award winning guitarist, engineer and producer Neil Citron. Completing this trio of master musicians is drum virtuoso Walter Garces, who also performs with '60s psychedelic marvels The Electric Prunes and is celebrating a partnership of 25 years with Premier Percussion, Paiste Cymbals and Gongs, and Calato/Regal-Tip sticks as an endorsing artist.

Eight of the new BangTower music videos were created by Marc Rubinstein of the world famous Pig Light Show, as a preview to elements of select upcoming live shows currently being designed. These video releases comprise all the tracks from the band's internationally acclaimed 2010 Declassified Records release 'Casting Shadows', produced by Neil Citron (who also engineered, mixed and mastered) and Jon Pomplin. The holiday video “I'll Be Home For Christmas” comes from a downloadable song Neil produced for the holiday season which is available for free from the BangTower website.

In addition to these eight excellent videos from Pig Light show, a new music video of the CD's opening track entitled “BBA”, produced by Declassified.TV, has been released and is available in several formats from the BangTower and Declassified Records websites as well as on the new BangTower YouTube channel "BangTowerTV". The video was filmed during the recent tour rehearsals in Los Angeles with founding members Neil Citron, Walter Garces and Percy Jones with a guest appearance by LA session musician Gary Crite on rhythm guitar and keyboards.

In addition to the "BBA" video, two additional videos were released on 2/21/2012, with an additional two videos to be released each Tuesday for the next three weeks. They are being made available on the BangTower and Declassified Records websites as well as the BangTower YouTube channel
www.youtube.com/bangtower

Here's what the music press has raved about BangTower's debut CD 'Casting Shadows':

“Just amazing! From jazz and funk to fusion flavored instro rock – it's all there in BangTower mix.” - Robert Silverstein – MWE3

"Blistering fusion, screaming rock, fiery jazz - whatever you call it, this trio will blow you away." - Stephanie Sollows - Progressive World

“This is a refreshing take of progressive compositions played with a serious no fear attitude.” - Jason Kot – Bass Musician Magazine

“A great album and one that I recommend to all, it'll be one of the best purchases you will make this year.” - Jon Nuedorf – Sea of Tranquility

The world famous Pig Light Show is the legendary outfit owned and operated by Marc Rubinstein, who thrilled and amazed concert goers of the Fillmore East in NY and the Capitol Theatre in NJ, from the late '60s / early '70s behind legendary music artists and bands like the Grateful Dead, Frank Zappa & the Mothers, Jethro Tull, Santana, Yes, Black Sabbath, Fleetwood Mac, the Allman Brothers and many, many others.

For more information on BangTower and it’s members visit: www.BangTower.com