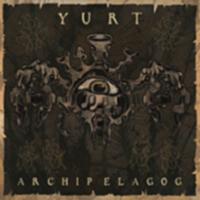 If there is one thing that you need to now about Yurt is that they are “slowly corroding.” Consisting of Andrew Bushe (drums), Steve Anderson (guitar, keyboards, vocals), and Boz Mugabe (bass, electronics, vocals, artwork), Archipelagog is their second album released exactly two years after their first. This album will give you a new appreciation of the winter solstice.

Enter the mysterious world of Yurt with “Archipelagog.” It sounds like the beginning of a science-fiction epic and are you about to go on a fantastic journey with the destination being both outer and inner space. The sparse lyrics make them stand-out more, so pay attention. Clocking in at just over 14 minutes, this is one long song that never gets stale. “The Wretch” begins with some spacey background music and ominous guitar work that really get going when the drums kick in. There is a sense of urgency that permeates throughout the music as if one were apart of a race or being chased.

Coming at just over 3 minutes long, “Rat Nebula” is one of the short tracks on the album with the other being “A Dystopian Gyre.” It is probably the most spacey of them all. I would describe the overall sound of the song as trance-like in nature. “Xeric Ascension” hits you right away with its opening bass and distorted guitar. The sound is heavy and brooding for the first half of the song. There is noticeable change in sound about halfway through after the lyrics. The music picks up a bit and is faster and lighter from the earlier sound, but it is a smooth transition overall.

“A Dystopian Gyre” feels like being lost in a vast wilderness with its creepy nature sounds. The music really gets in your head and will have you looking over your shoulder. And then there is “Cicada,” an epic masterpiece running at around nineteen minutes long. It could not have ended the album any better with its raw and organic sound. It is a brilliant penultimate track to top all the others.

Archipelagog by Yurt is the type of album that grows on you with each listen. Full of wonder and eeriness, it is quite the experience to behold and one worth taking. Turn off the lights, close your eyes, and let the music take you away to another world.