Review: Against The Wall-Things Are Not Like They Said 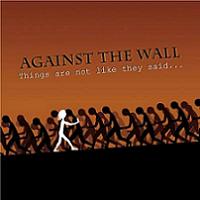 It is always a good feeling to come across a band that is not afraid to push the boundaries of their music.  Against The Wall is that type of band.  Consisting of Daniel Jakubovic (vocals, lead guitar), Jon Feirman (bass), Boris Pelekh (guitar), and Pavel Valdman (drums), Against The Wall knows how to take risks and do they ever pay off.  Things Are Not Like They Said is their second release and it is a marvelous one at that. It will keep you thrilled and entertained with its wide range of musical influences, which include classical. That is right, classical.

It can be said that classical composers such as Beethoven and Mozart were the original rock stars, so a marriage of the classical and rock genres is not as totally far-fetched as it might appear.  “Overture / Would You Be Happy” has a very somber opening with its classical instruments in the songs first part and its keeps getting better from there.  The second part becomes more dramatic musically and I like how the music tempo is rising throughout the song.  Also, the addition of the rock and classical sounds makes for some wonderful listening.   There is much passion and emotion in this 10-min plus song. “The Enemy” gets off to a strong start as it has a really hard kick in the beginning. The message of this song comes off clearly with the result of being able to taste the bitterness in the lyrics.  This is definitely a good break-up song, or for those dealing with any type of betrayal in a relationship.  “A Few Days Left” brings the energy down a bit from the previous songs. It is a moody and atmospheric song about love and loss.

“Temporary” is the type of song that immediately grabbed my attention with its interesting sound, especially during the opening.  And then there is the inspiring message of the song that brings it to the next level.  With its thundering opening of pounding drums and roaring guitars, “Take Everything” is probably the heaviest song on the album and one of the highlights.  Sporting heavy use of a piano, “Lost Inside” continues to keep the sound of the album fresh and gripping.  “Look Up At The Sky” is a sweet hard rock song that gets nice and heavy in the second half of the song.  “Get Up” flies out the gate with lots of energy and makes you, well, want to get up and do something. The song finishes strong with some ripping guitars. Switching up the tempo, “Blown Away” and “A Dose Of Reason” tone it down and add a melodic touch to this album that has already featured many various influences.  “Stuck In A Daze” is a brilliant ending and brings it home in true hard rock style.

Things Are Not Like They Said is the sophomore effort that most bands dream of making.  While they are dreaming, Against the Wall is one band that can deliver.  It is the type of album that gets better with each listen.  The wide range of musical influences showcases their masterful songwriting abilities and makes for some great tunes.

Key Tracks: Overture / Would You Be Happy, The Enemy, Take Everything, Get Up, Stuck In A Daze

Email ThisBlogThis!Share to TwitterShare to FacebookShare to Pinterest
Labels: Against The Wall, Prog Rock, Things Are Not Like They Said