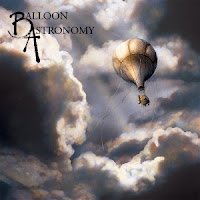 When was the last time you heard a new progressive rock band release a debut CD that made you want to spin it over and over? Well I have just the tonic you desire. Balloon Astronomy takes all of their influences and combines them in a potent brew of classic prog rock on the self-titled debut. In fact, if there are any young bands out their looking for a role model for sound this band needs a good look.

Jim Ledger (lead and backing vocals, bass, acoustic and electric guitars) and Glenn Little (keyboards, flutes, charango, ukulele, guitars) met in junior high and soon found out they shared a love for acts like Genesis, which is the first band that came to mind while listening to the opening track “Crows in the Field.” Then there was Jethro Tull, Strawbs, Anthony Phillips, Mike Oldfield, Supertramp, Renaissance, Cat Stevens, and Elton John that peaked their interest as well. So how is it that you can hear all of these artists in their music? It is not very difficult actually, much easier than you would think, well for Balloon Astronomy anyway.

What I found so appealing besides the fantastic music was Ledger’s vocals. They are clear, expressive, and right on point. I can actually understand every word.  Many times I hear great music but really struggle to understand what the vocalist is trying to say.

“The Odyssey” is a good example of the multifaceted sounds that this duo produces. And believe me it is very prog, they go through several transitions in one track. By no coincidence this is the longest track clocking in at 6:37. The atmospheres range from epic apexes, like a volcano erupting, to the beauty of a pristine stream babbling that calls to you offering a passage of serenity. All of this is accomplished within six and half minutes. It echoes the band’s name in many ways. If you can envision going up in a hot air balloon on a clear night to observe the constellations, think how expansive and wondrous that would be. That is what their music is all about.  It does not get any more expressive than that when it comes to recording prog rock with an impact.

Another track that sets the tone is “Eagle,” it soars as high as its namesake, particularly with the keyboards. I would earmark this one to be looked upon as a fan favorite and remembered as a classic for as long as the band is around and many years thereafter. If you take a look at all the instruments that come into play on this recording (see credits above) it’s no wonder it sounds as good as it does. ”Sigmoid Fletcher” is another slice of pie from the world of early Genesis. It is a rollicking good tune that brings a smile to your face and your heart. The way they end this album is very interesting with some instrumental classically influenced keyboard and guitar licks. It sounds like something from one of Rick Wakeman’s solo albums - The Six Wives of Henry the VIII comes to mind in the front end of the track. Leave it to a prog band to end an album this way after hearing 11 tracks full of tremendous vocals. To leave you pondering with some instrumental virtuosity that would give any prog head his money’s worth on the way out the door is appropriate.

This band is unsigned right now, but not for long. I am willing to bet this album makes many top ten lists this year.  Music is a form of art at the highest level and this is a masterpiece of the progressive rock genre.