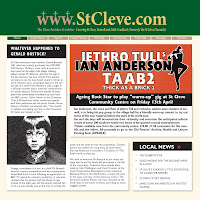 My first reaction to Thick As A Brick 2 otherwise known as TAAB2, was where is Martin Barre? He has been playing with Ian and Jethro Tull forever! Well Martin is busy recording a two disc solo album. I do not think he has ever missed a Jethro Tull studio album because of a session he was involved in due to solo work. There may be more to this than meets the eye and there probably is. Irregardless Anderson soldiers on to bring Gerald Bostock, the main character in the story up to date, now 40 years later at 50 years old and what his story would sound like now.

Intrigued yet? If you are a lifetime fan of the band such as I, well of course you are, if not you probably could care less, then again if you are progressive rock fan certainly your outright curiosity will get the best of you and then you must listen!

The 40th Anniversary of the original album is celebrated with Thick As A Brick 2 and a lineup that includes Ian Anderson at the helm providing all the writing, vocals, flute and his mini acoustic guitar, John O’Hara (Hammond Organ, piano, keyboards), David Goodier (bass guitar, glockenspiel), Florian Opahle (electric guitar), and Scott Hammond (drums, percussion). Some of you may recognize guitarist Ophale from Ian’s solo work or his orchestral projects back in 2003. He is no newcomer to the world of recorded music and performing. Considering he received master class instruction from the legendary jazz-rock-fusion guitarist Al Di Meola, it comes as no surprise to me that he was a more than an adequate replacement for Mr. Barre. Barre is a great player and it is disappointing to see him absent from this album however you have to give credit to all the musicians involved as they did a superlative job with Ian’s new incarnation of the album.

This is an excellent album offered in two formats, the one CD package and the 2 Disc Special Edition, which I received for review. This version comes in a tri-fold out CD case with the regular CD and a DVD featuring 5.1 stereo mixes, 24-bit stereo mix, video making of the album, interviews with the musicians and Ian reading the lyrics in various locations, and a booklet. If you pop the 5.1 DVD in your stereo system connected to your TV or PC each song displays the words as they move down the page to lead you. A pretty cool feature I thought. What was nice about the in studio footage was that it is a very rare occasion as Anderson never allows that to happen. So all of you JT fans can enjoy this and take advantage of the opportunity and get the special edition.

Ian Anderson is a bit eccentric and his words that make up his music and song are direct reflection of his personality and experiences. He does have a vivid imagination and is a gifted songwriter and musician. So how does this second version stand up to its forerunner? Firstly the vocals are a few notches down as they have been over the last several years but that is just fine. Ian has adapted to his lost range and brings a new found resonance and a poetic sense to his delivery. He has a defined talk-sing type of voice now that actually suits the music quite well. The energy is entirely different on this album, there are flashes of brilliant musicianship and Ian and the boys cut loose here and there but the overall atmosphere is one of reflection with an added pensiveness as Mr. Bostock makes his way through all the pitfalls of society today. It becomes obvious that this is a man living out of time and would have been better suited  in old England sipping tea in the garden.

I gave TAAB2 several spins along with a listen to the 5.1 surround sound (mixed by Steven Wilson) and it all sounded crisp and clear. Anderson’s voice is punctuated by well-placed instrumentation as you would expect and the story rolls along in stride with every note. This will be the kind of album that grows on you with each listen and I think many folks will agree this is some of Ian’s best work in the last decade. Tull’s last studio album was the 2003 The Jethro Tull Christmas Album, which was excellent I might add. And actually the last normal JT studio release was J-Tull Dot Com in 1999, the only release in their entire catalog that I did not care for.

TAAB2 offers up tasty treats such as ”Upper Sixth Loan Shark” and “What-ifs, Maybes And Might-have-beens”  and “Banker Bets Banker Wins,” which has an extremely catching guitar riff running through it. It all sounds familiar, in a comforting way if you are a fan, and most importantly sounding like something Ian would write. He spins a yarn like no other in music today and is the true minstrel in the gallery once again.

TAAB2 will not go down as a classic like its predecessor or albums like Aqualung or Passion Play but it can be appreciated as a solid release for Jethro Tull 2012 with an entirely different lineup. Even without Martin Barre playing guitar it still sounds like a Tull album because let’s face it, Ian Anderson is the man that makes it all tick. This entire album most definitely is a “Change of Horses” and it works out all very well making this a welcome addition to the Jethro Tull catalog.