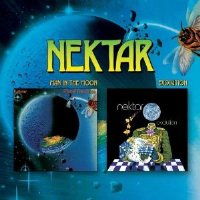 Nektar is one of those important bands that found success during the classic progressive rock period of the 70’s then lost some ground once the decade ended. Roy Albrighton is the band’s longtime leader, vocalist, and lead guitar player. He has gone through various incarnations with the band.

Cleopatra has reissued two albums and one EP from the Nektar catalog, Man In The Moon (1980) / Evolution (2004) and the bonus EP Always (2005). Perhaps these releases have been overlooked due to all of the classic releases during the 70s. The two CD’s come housed in trifold cardboard case with the magnificent artwork of both albums on the cover, pictures of both bands on the inside, and a nice write up in a booklet.

Roye Albrighton, Allan “Taff” Freeman, and Ron Howden reunited with recently enlisted bassist Randy Dembo and put out the excellent Evolution in 2004 which was most certainly a return to the form the band enjoyed at the very height their success when they released a string of outstanding recordings in the 70s. Man In The Moon is an entirely different story.

Man In The Moon’s lineup was Roye Albrighton (Guitar, Lead Vocals, Background Vocals), Allan “Taff” Freeman (Keyboards), David Prater (Drums, Background Vocals), and Carmine Rojas (Bass, Keyboards). If anything what was accomplished with these two releases is the fact that it presented two different versions of the band and consequently two different sounds and styles. One of the things that really kept Man In The Moon sounding like Nektar is Roye’s trademark vocals. He does an admirable job within a decidedly commercial sounding recording in comparison to any other release.

Make no mistake this is Nektar, just different people and sounds surrounding the main man.  The Nektar faithful would be on two sides of the fence with this release. The ardent collector would have a copy and the old school progheads would not consider it a true Nektar release. It is not a bad album, it’s good, just not great like you would expect from this exceptional band. “Too Young To Die” is a fine opening track and “Far Away” sounds like it could have been a hit single. The rest of the album is adequate but not something that really gets under your skin and keeps your attention for a sustained amount of time. There are some moments where the guitar runs will get your attention like on “Torraine.” There is also a bonus track added to sweeten the sour taste you may have had in your mouth titled “Straight Jacket.”

Evolution is return to form and quickly makes you forget about that somewhat unwelcome change you just heard. I do not want to trash Man In The Moon, as I said it was not a bad album it just did not give you much to hang onto and reason to revisit. Evolution was perfect timing after the band’s back catalog had been remastered and released again after a 20 year absence. This proved once again that Nektar were the quintessential prog rockers and it has carried them with plenty of momentum and excitement to present day.

“Camouflage To White” kicks starts the proceedings in typical classic Nektar fashion followed by the thought provoking and beautiful ” Old Mother Earth,” which has its high points that rock, reaching crescendos of sounds and atmospheres appropriately dedicated to our life sustaining planet. Roye peels off some magnificent licks on the track and it is a full bodied composition that really shows off the talents of all the band members. That is the one factor that makes this band what they are. Granted Roye is the core of the Nektar planet however where would he be without the other members? It is special kind of magic they make on this recording. “Child of Mine” is emotive and colorful and definitely one of the best tracks on the album. After soaking up the beauty and innocence of a child you then are brought back to a classic Nektar rocker called “Phazed By The Storm.” The lead vocals and harmonizing is excellent and the music driving this piece is spectacular.

Nektar has not lost their touch, they still can stimulate with their music, make you think and reflect with their lyrics, and take you to places that only great bands can. The transitions, colors and textures of their music are what make them so unique and one of my favorite prog rock bands. I realize it has been a few years since a new studio release has arrived however if you watch any of their DVDs or video footage featuring live performances you will see that they still know how to turn it on and bring an audience to prog rock nirvana.

If you think about the title, Evolution, it is quite appropriate as the band and its individual members do evolve and coalesce to make a powerful statement on the album. Prog on Nektar!

Key Tracks: Camouflage To White, Child of Mine, Too Young To Die