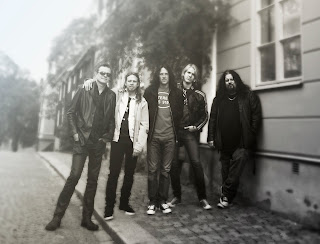 Sweden - The progressive rock community around the world is on fire about legendary Flower Kings vocalist Hasse Fröberg and his group Musical Companion new album 'Powerplay'. Available on Reingold Records on April 23, 'Powerplay' is the second album by Swedish progrockers Hasse Fröberg & Musical Companion. About a year after the release of their critically highly acclaimed debut 'Future Past' (Sept. 2010), the band entered the studio to cut the backing tracks for 'Powerplay' (April 2012). This time around, HFMC provides even harder hitting progressive rock - a must for fans of Rush, The Flower Kings and YES!

" 'Powerpay' is more wild and crazy than 'Future Past', " Hasse explains. "Still, the melodies are in focus and we're still the same guys in the band, so you'll definitely recognize our sound. Some of the lyrics are by far the most personal I have written, while others reflect the world around us. At least the way I see it."

The debut CD generated gigs in countries such as Sweden, Norway, Germany, Holland and Belgium. With the release of 'Powerplay', the band is now confirmed for festivals (“RoSfest”, Gettysburg in USA and “Night of the prog”, Loreley in Germany) as well as gigs on both sides of the Atlantic.

As sound engineer on 'Powerplay', the band has chosen to work with Tomas Bodin. He’s a collegue with Hasse in the established and influential prog band The Flower Kings. The collaboration proved to work out just fine and even if Hasse likes to be in the studio, he prefers the live scene: “Playing live is definitely the right element for us. I really can’t wait to take The Musical Companion and and the songs on 'Powerplay' on the road”.

Release date 23rd of April, 2012 - Presented in a luxurious digipak with 12-page booklet

Pre-orders from www.reingoldrecords.com 13th of April, 2012