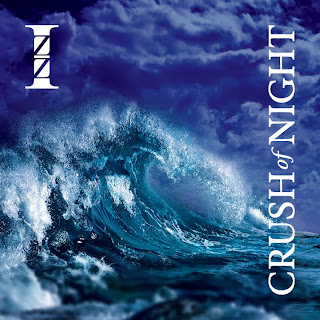 New York, NY – IZZ’s new studio album, Crush of Night, scheduled for release on May 1st, serves as Part 2 of a 3-part series of thematic albums that began with The Darkened Room (TDR) in 2009. Featuring a guest appearance by Gary Green of Gentle Giant on Words and Miracles (Electric guitar, Guitar solos and backing vocals) and The Crush of Night (guitar solo), IZZ brings their characteristic sense of melody to the fore on this album, while at the same time fusing high reaching emotion with the driving impact that IZZ fans have come to identify with the band.

From the opening vocal melody of You’ve Got a Time, to the guitar-driven Words and Miracles featuring the distinctive guitar sound of Gary Green, to the stirring emotion of Half the Way, culminating with the impressive 26 minute suite that shares its name with the album title, Crush of Night passionately delivers on all fronts by creating a sound that is uniquely IZZ.

“We started recording some of the tracks for this album at the same time we were working on The Darkened Room, so there is definitely a strong sense of continuity between the two albums,” notes keyboardist and vocalist Tom Galgano. “At the same time, as we developed the pieces for Crush of Night, it began to take on its own identity and in many ways is completely different from what was heard on the last IZZ record.”

The 26-minute suite, Crush of Night, is divided into two tracks, This Reality and The Crush of Night. Serving as the musical, lyrical and emotional centerpiece for the album, this piece brings together the struggle that surrounds one's search for meaning. The Crush of Night suite runs a musical panorama, weaving melodic and rhythmic themes with innovative and fresh diversity.

IZZ had the distinct pleasure of having Gary Green join them in the recording process. "Having Gary come to the studio and record with us was an amazing experience,” says IZZ bassist John Galgano. “Gary came in and not only added his signature guitar playing, but also contributed to the writing, added a few blistering solos and even sang backing vocals on Words and Miracles. It is a great honor to have Gary playing alongside us on this record and we know that fans of Gary will enjoy the guitar artistry that he’s added to this IZZ record.”

The IZZ line-up for Crush of Night is:

In other news, IZZ will kick off the release of Crush of Night with a full-band live performance at the New Jersey Proghouse (www.njproghouse.com) on April 22 and will follow up this show with an appearance at the Terra Incognita Festival in Quebec City, Canada on May 19. IZZ plans to announce more shows in support of Crush of Night for Fall 2012. The band will also return to the studio to continue work on the third and final chapter of this series of albums. In October 2011, IZZ released their first live DVD, IZZ LIVE. Fans can purchase the DVD from any online retailer. In addition, bassist John Galgano is in the final stages of mixing his first solo album and guitarist Paul Bremner continues recording his new solo album.

For more information on Crush of Night and for the most updated information about IZZ, please visit:

IZZ’s Crush of Night will be available for purchase at Amazon, iTunes and all online music retailers.