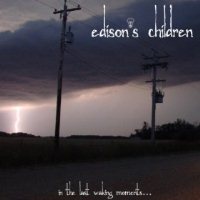 Edison’s Children’s debut album, In The Last Waking Moments, is the product of the recent collaboration between Pete Trewavas of Aylesbury, England, and Eric Blackwood of Sugar Loaf, New York, U.S.A. Really though, it’s almost a Marillion side project, as members of the band make appearances throughout the album at various points. The sound is similar, with fewer pop elements in the mix. In The Last Waking Moments is more of a sojourn into the realm of conceptual progressive rock.

Marillion, to me has, always sounded like a second rate Genesis. Not in a bad way…just that I felt their sound was not really their own. (Another thing I’ve noticed about Marillion is how many of their song names later became names of bands (Fugazi, Incubus, &c.). Whether this is by design or not is really anyone’s guess (An irrelevant fact, worth noting none the less). This Edison’s Children project seems to have allowed the contributing members to stretch out a bit, and experiment with sounds and styles.

I like the tension that’s created in the “Fracture” intro. The slow build is pretty effective. It’s like sleepy rock. The tribal, jungle rhythms lull the listener into a trance-like state. Similarly, “Fallout (Of The 2nd Kind)” is very dense. Between the synth melody, the effects on the vocals, the percussion (which is mixed surprisingly low), there’s a lot for the listener to process.

The stutter step funk of “The “Other” Other Dimension” is fun at first, but I’m grateful for the changes as they occur. It mutates into something around the two minute mark that I rather enjoy (though it’s hard to say what that is exactly), but by the third minute it winds up sounding exactly like the track before it. Much to my relief, it returns to the stutter-funk without much ado, and remains in a suspended state of strange for the rest of the song.

“A Million Miles Away (I Wish I Had A Time Machine)” sounds like it would fit nicely on the B-side of a John Frusciante album. With those guitar melodies and vocal harmonies, it sounds like something that might have been cut from Shadows Collide With People (for no readily discernible reason).

“Outerspaced” is promising; it has a pretty gnarly bass groove. I like heavy riff-laden rock, and that’s basically what this track amounts to. It’s almost like Clutch meets AC/DC. It ends rather abruptly and the opening notes of the following track ooze through the speakers sounding like a polished remnant of something someone scraped up off Pink Floyd’s cutting room floor.

This album’s a grower, not a shower. It takes a few times through to appreciate the subtle nuanced texture and really get to know it. (That is, if you have the time and patience for that kind of thing …) If you’re expecting to be wow’d right out of the gate, you’re only setting yourself up for disappointment. By the third or fourth spin, you should start to see what I mean. (And if you still don’t like the album, try drinking more. I’ve found this helps.) It’s atmospheric and emotional, but at times texturally confusing. Often you might end up missing the forest for the trees. I found myself getting so hung up on individual parts that I missed out on how they may have worked into the larger composition.

Key Tracks: A Million Miles Away (I Wish I Had A Time Machine), Outerspaced, In The Last Waking Moments
Drew Vreeland